Why do some young people become heavily involved in crime and why do most stop ?

Susan McVie is Professor of Quantitative Criminology at the School of Law in the University of Edinburgh. She has published work on a variety of topics, although mainly in the areas of youth crime and justice, criminal careers, and crime trends and patterns. Here she is speaking at the Barrow Cadbury Trust conference. (The Barrow Cadbury Trust is an independent, charitable foundation, committed to bringing about socially just change.)

McVie begins her talk by producing a graph. 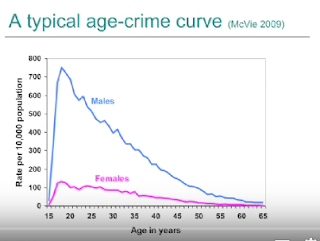 She explains that this is a typical age-crime curve - "taken from Scotland but you could find similar curves elsewhere. This distinctive curve has been around since the 1830s and ever since data has been collected about crime and offending behaviour it has tended to show this distinctive curve in the data. So we have a large upsurge in terms of offending somewhere during the adolescent years which peaks in this case somewhere around eighteen and then starts to decline slowly. So there`s the long tail on the right hand side of the graph there, the desistance tail. It`s the pattern by which people desist from offending over a period of time and is one of the most ubiquitous findings in criminology. It`s also one of the least contested issues ... Perhaps more contested though is the reasons behind it. Why does it increase so sharply in adolescent years and then why does it start to tail off? "

"Most UK research on desistance has focused on captive populations (very small known populations of offenders). There has been little experimental research to compare the outcomes of those who receive some form of intervention with those who don`t..."

"The Edinburgh Study of Youth Transitions and Crime aims to understand why some young people become heavily involved in crime and why most stop..."

"Early identification of at-risk children is not a water-tight process and may be iatrogenic. There has been a lot in the press for a number of years about early identification of at-risk children and early intervention - while that is not something I necessarily want to disagree with - it is not a watertight process . If your idea of identifying at-risk children early is to try to predict whether they are going to be the offenders of the future then I`m afraid you`re barking up the wrong tree and also more concerning is that they can be iatrogenic; they can be damaging to children to label them and target them in that sort of way."

"The vast majority of young people have a low probability of being convicted. The biggest group are the later-onset; you might actually call them the normal conviction group. Most people are not convicted until they get into their late teens and early twenties but the thing that the age-crime curve does conceal is two early onset groups. So one percent of our sample were early onset chronic and another were early onset desisters. You have two very small groups of young people who start to get convicted at a very early age and they will reach a point round about age 13 where their trajectories start to diverge . What happens that one group goes on to have a very prolific conviction trajectory and one group tails off and is not convicted very much beyond 15?  How do the groups differ at age 12 ?"

"Exploring patterns of police contact showed that young people with `previous form` were significantly more likely to be charged by police and processed by the youth justice system than those with no prior contact. The `usual suspects` were mostly boys from socially deprived areas living in single parent households."

"Those who received `diversionary` measures - police charges and then no further action and young people who were referred to the Reporter and then had no further action -  were significantly less likely to be involved in serious offending one year later. However, those who went full on into the hearing system and were subject to compulsory measures of care inhibited the normal process of desistance from serious offending."

"Many of our young people who come out of our youth justice system go on to serve a life sentence by instalments."

"The Edinburgh Study of Youth Transitions and Crime (ESYTC) has generated new understanding about youth offending and the impact of interventions. The study has led directly to reform in youth justice policy and practice in Scotland and has had international influence."