"As debate kicks off at Westminster over the surveillance powers of spies and the police, the 55 Scottish National Party lawmakers look likely to be a restraining influence."


"The party’s general election manifesto pledged to oppose the Snooper’s Charter. A decade ago, SNP MPs were among the first to oppose New Labour’s identity card scheme."


"But in Scotland, the SNP-run government is introducing, or at least considering, IT-led projects which some critics see as increasing surveillance, including a data-sharing system covering all children, an upgraded CCTV network run by the police, and a Scottish identity scheme."


"The plan which has attracted the strongest opposition is the Named Person scheme, allocating a state-sector professional to every under-18 in Scotland. The scheme, which is already operating in some areas and will cover all of Scotland by August 2016, provides someone who can respond to requests for help from a child, as well as work with those who have concerns for his or her wellbeing."


"It has similarities with ContactPoint, a New Labour system that would have kept tabs on all children in England if it hadn’t been abolished along with ID cards by the Tory-LibDem coalition government in 2011."


"NO2NP, a pressure group set up by civil liberties, educational and Christian organisations to oppose the scheme, is worried about how many people will have access to the data and how it will be secured, as "once personal data is out there, there's no getting it back," said spokesperson Colin Hart."


"The Scottish Government dismisses this. "The individuals that will be delivering the Named Person functions – typically health visitors and senior school staff – are currently handling and processing personal sensitive and confidential information. The organisations that support them already have systems and processes in place to support the legal and secure storage of this information," said its own spokesperson."

That last paragraph is interesting but unfortunately it is not documented who the Scottish Government spokesperson was.

Nor is it clear who wrote the Top Ten Named Person Facts on the Scottish Government website but there is not one of them which is accurate. Numbers four and five are particularly relevant.

A Named Person will not directly access personal information...
But as the above article indicates named persons are currently handling and processing personal sensitive and confidential information.

The creation of the Named Person service does not change privacy laws or infringe on human rights...

On the contrary, wellbeing indicators have been categorised that are so wide they cover every aspect of life, and the legislation has been put in place to change privacy laws that many would argue infringe on human rights. See below:

76. Currently, information about a child may be shared where the child is at a significant risk of harm. However, the role of the Named Person is based on the idea that information on less critical concerns about a child`s wellbeing must be shared if a full picture of their wellbeing is to be put together and if action is to be taken to prevent these concerns developing into more serious issues. Without the necessary power to share that kind of information, the Named Person will not be able to act as effectively as is intended...

77. Specific provisions in the Bill, therefore, set out arrangements on information sharing, to give professionals and Named Persons the power to share information about those concerns. 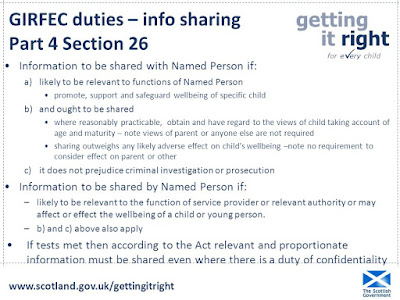