Australians must immunise their `little blighters` or lose welfare payments 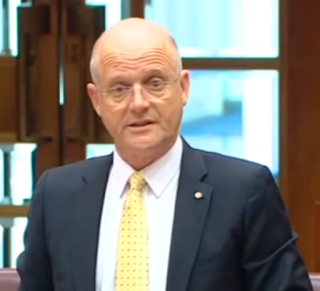 "Liberal Democrats Senator David Leyonhjelm believes it's unfair for childless Australians to be subsidising the lifestyles of those who choose to have `little blighters`."


"Speaking in support of legislation which would strip childcare and other benefits from parents who don't immunise their children, Senator Leyonhjelm said most welfare payments for parents should be abolished."


"`The government is not your parent or your spouse - get over it,` he told the Senate yesterday. `It is bad enough that people continue to bring wave after wave of these little blighters into the world."


"`The least they can do is immunise their bundles of dribble and sputum so they don’t make the rest of us sick.`"


"Parents who don't immunise their children will stop receiving childcare benefits next year."


"The federal government's no-jab-no-pay laws will remove childcare benefits, rebates and the Family Tax Benefit A end-of-year supplement from parents who don't immunise their children."


"The changes start on January 1, 2016, with exemptions for medical reasons, after legislation passed the Senate on Monday."

Read more at http://www.9news.com.au/national/2015/11/23/12/45/get-over-welfare-leyonhjelm-tells-parents#bwWwwmublDHvi6Z4.99
But there is more to consider than money:

The average number of babies Australian women are having has fallen to the lowest level in 10 years – the level it was when the federal government introduced a baby bonus to boost population growth.

The national fertility rate has dropped to 1.8 children per woman, down from 1.88 children last year.


All things being equal, the national fertility rate should be 2 children per woman if the population is to sustain itself.


I`m not sure what kind of mission Senator David Leyonhjelm is on, but Australia`s future isn`t it.