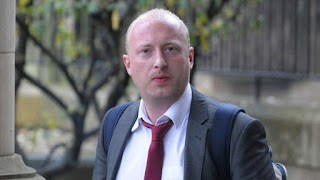 "A police worker from Dumfries has admitted possessing indecent photographs of children. "


"Barry Rankine, 32, also abused his position to get confidential details about vulnerable children in care. "


"At the High Court in Glasgow he pled guilty to seven charges committed between 2007 and 2014."


"They included crimes connected with the Data Protection Act and theft. He was remanded in custody and will be sentenced later this month. "


"Prosecutors said Rankine, an IT support officer, secretly copied a host of information - including photographs of the youngsters - onto a USB drive."


"Among the offences he admitted was a charge that he illegally obtained information linked to a children's residential home in Dumfries and Galloway in October 2010. "


"This was carried out at addresses including the police divisional headquarters in Dumfries. "