There are two stories that have come out of Paris that I find intriguing.  One is the story of a young woman who is described as vulnerable and fragile. Those who have been put through the care system are often described in these terms and can be taken advantage of; but it is likely that we will never really know what happened to the woman.

"A woman who reportedly blew herself up during a raid in Saint Denis was "vulnerable" and "fragile", a former school friend has claimed. "

"The friend, named only as Khemissa, said Hasna Aitboulahcen had been a normal girl at school, getting good grades, but that she had gone through a bad patch, being moved between foster families. Aitboulahcan is understood to have activated a suicide vest during a police raid on a flat, following Friday's deadly attacks in Paris." 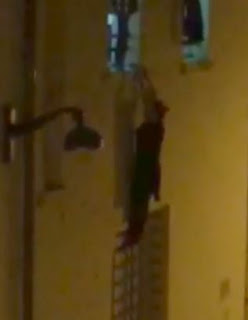 Not everyone is convinced:


"It is incredible that there is so little mobile phone footage of the Paris events given that everybody carries one these days. The little footage that exists (like this) strains credulity. I find it very hard indeed to believe that a pregnant woman could hang on to a window ledge for ages like that and then some hero (unseen) arrives later to pull her to safety. Is she on a wire? Is this some kind of theatre to make us believe in another event that (again) none of us have seen. There is no convincing footage of what happened during the attacks inside the Concert Hall..."

The event was filmed by a journalist who just happened to be in a flat in the building opposite.