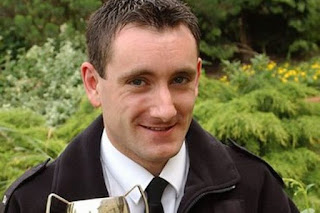 A former award-winning police officer who sexually abused a boy and paid another victim for sex has been jailed for four years and two months.


Ex-Warwickshire Police sergeant Christopher Cambray, 42, was ordered to undergo an extended five-year licence period after being described as a dangerous offender posing a serious risk to potential victims.


In 2002, he was voted best trainee officer of the year, out of 100 other students across Warwickshire. The then community beat bobby for Whitnash was honoured as Probationer of the Year by then Warwickshire Police Chief Constable John Burbeck.


Cambray, from Shrewley, Warwickshire , pleaded guilty last month to a charge of paying for the sexual services of a child, three counts relating to indecent photographs, and two of sexual activity with a child.


The officer, who was dismissed by his force in July, was condemned by a judge at Birmingham Crown Court for "projecting fault" on to the complainants in the case.


Judge Mark Wall QC told Cambray: "I have to consider whether I am to treat you as a dangerous offender. The answer I have come up with is that I should and I will.


"This is a prolonged course of conduct going on over a number of years."


http://www.birminghammail.co.uk/news/midlands-news/ex-police-officer-jailed-abusing-10515922#ICID=sharebar_facebook
Posted by Alice Moore at 08:20