Advice from Jim Sillars to SNP: stop digging a hole 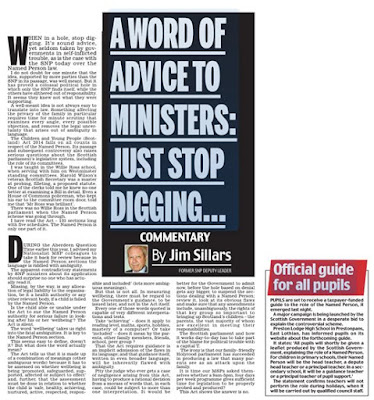 For those without zoom:
"When in a hole, stop digging. It`s sound advice, yet seldom taken by governments in self-inflicted trouble, as is the case with the SNP today over the Named Person law."
"I do not doubt for one minute that the idea supported by more parties than the SNP in its passage, was well meant. But it has proved a colossal political hole in which only the SNP finds itself, while the others have slithered out of responsibility.  It seems they knew not what they were supporting."

"A well-meant idea is not always easy to translate into law. Something affecting the privacy of the family in particular requires time for minute scrutiny that examines every angle, every possible objection, and removes the legal uncertainty that arise out of ambiguity in language."

"The Children and Young People (Scotland) Act 2014 fails on all counts in respect of the Named Person. Its passage and subsequent controversy also raises serious questions about the Scottish parliament`s legislative system, including the role of its committees..."

"During the Aberdeen Question Time earlier this year, I advised my Nationalist MSP colleagues to take it back for review because in the Named Person sections the language is riddled with ambiguity."

"The apparent contradictory statements by SNP ministers about its application should surprise no one who has actually read it."

"Missing, by the way, is any allocation of legal liability to the organisation, be it a health authority or any other relevant body, if a child is failed by the Named Person."

"The word `wellbeing` takes us right into the fatal ambiguities. It is key to the Named Person section."

"This seems easy to define, doesn`t it?  But what does the word actually mean?"

"The Act tells us that it is made up of a combination of meanings (other ambiguous words) because it has to be assessed on whether wellbeing is being `promoted, safeguarded, supported, affected or subject to effect` and, further, that the assessment must be done in relation to whether the child is `safe, healthy, achieving... and included` (lots more ambiguous meanings)." [SHANARRI]

"But that is not all. In measuring wellbeing, there must be regard to the Government`s guidance to be issued later, and not in the Act itself."

"Every one of those words quoted is capable of very different interpretations and tests."

"Take `achieving` - does it apply to reading level, maths, sports, hobbies, mastery of a computer?  Or take `included` - does it mean by the parents, other family members, friends, school, peer group ?"

"That the Act requires guidance is an implicit admission of the flaws in its language; and that guidance itself, written in even broader language, will be inherently flawed with ambiguity."

"Pity the judge who ever gets a case of negligence arising from this Act..."

Many people believe that Named Persons are putting their heads on the block should things go wrong;  they are not. Note how well any potential Named person in the Liam Fee case has been protected. It is the body which appoints the Named Person which is accountable, according to the law.

I am glad Jim Sillars has pointed that out.

The layer of complexity is a mile thick.

It will be interesting to see how the SNP digs itself out of its hole, this Wednesday in Holyrood.

NOT TO BE MISSED.