"Childline founder says that police forces should use their limited resources to catch paedophiles currently at large, rather than ones who are long dead."

"Esther Rantzen, the Childline founder, has urged police to concentrate on protecting today’s victims of child abuse rather than `wasting time` on multi-million pound investigations into people who are dead."

"The former television presenter,... said paedophiles abusing children today might avoid detection if police were using their limited resources to delve into the distant past."

"Ms Rantzen was speaking after it emerged that Wiltshire Police is to spend more than £100,000 recruiting four civilian investigators to trawl through the late Sir Edward Heath`s private papers for evidence that he was a paedophile..."

"The investigation began last year following a retired officer’s claim that abuse allegations against the former Conservative prime minister were covered up in the 1990s. At least seven people have made allegations of abuse against Heath, including one claim tat he abused a boy on his yacht before throwing him overboard." 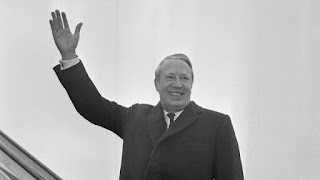 And if he had been blackmailed to take Britain into the European Common Market ?  [Now called the European Union]
Posted by Alice Moore at 13:01