UK Column News had an interesting discussion on the topic of mental health on Tuesday 9 February 2016. I`ll provide a rough transcript in order to make referencing easier.


They begin by looking at: Restricting the use of police cells for those experiencing a mental health problem.


"Banning the use of police cells as a place of safety for under 18s and ensuring they are only used for adults in exceptional circumstances. That`s the pacifier headline," says Brian Gerrish.

He reads the text. "The Government has been clear that police cells are a poor environment for any person experiencing a mental health crises. They can make service users feel criminalised and exacerbate levels of distress." He points out that this is the British Government. "Trust us. We`re looking after you. Well are they ? "


"When you get deeper into this you find that they are going to make changes to the Mental Health Act under the forthcoming Police and Crime Bill. So I`m going to say we`ve got mental health changes being hidden under the title of Policing and Crime. So we`ve got banning police cells as a place of safety for under 18s. That`s the bit that sounds OK but when you read into this you see other things."


He continues reading: "Widening the current definition of a place of safety to increase local capacity and flexibility. What does that mean Mike?  Being held in a local authority? ... We`ve got this one: Extending police officers` powers to act quickly to detain and remove people experiencing a mental health crises from any place other than a private dwelling - and then it tries to reassure you (for which a warrant would still be required)."


"And then we go down to the last one: Clarifying that assessments under the Act can take place in a private dwelling."


Mike Robinson asks:  "Does that mean they can break your door down in order to assess you?"


"Assess you and section you or take you for assessment under MAPPA . That`s exactly what I think this is doing Mike. This is about bringing mental health into your home."


"Well that website led onto this: The Crises Care Concordat and I think this organisation is just amazing. You will see that a national agreement has been reached between a whole variety of service agencies to support people in crises. So it is being sold as if this is something nice -  to look after people -  but when you get into it, it is just astonishing.  Because these are some of the existing signatories to this concordat. Everybody is suddenly involved in mental health.  Department of Health, that`s fine; Social Work, maybe; Education; local government; charities; Ministry of Defence; National Police Chief Council; Public Health; NHS providers. On it goes. And of course, the bit that is extremely dangerous.  In come the charities and third sector as if these are formal government bodies."


"So we`ve got some of the main ones: Rethink we`re going to be mentioning in a minute, Stonewall, Turning Point, Young Minds, all of these being linked together in order to provide a network which can simply pick people up and section them."


The next page they look at is National Inspirations.


"So we should be able to show a list here. ..We should be able to scroll down here.  Just look at the organisations and documents which are now all clustered around our mental health. These people are saying: trust us we`ve got your best interests at heart but have they really? It`s astonishing Mike. This list."


"Absolutely not, but of course under the MAPPA arrangements it doesn`t matter because if he was to make an accusation against you, or one of your local authority people or a local community police officer -  unqualified people can make an accusation with no evidence. - along comes the team to assess whether you`re a risk to society, the state, etc. "


"That makes me feel safe."


"Well we`ll just let this run through because the list is, as I say, astonishing. It will come to a halt very shortly. I haven`t counted out the exact number ...This is all about caring for people, Quality of Care, and on the documents go . And, of course, none of this was debated in Parliament.  None of this was brought forward to the public. But this huge network is being knitted together behind our backs." 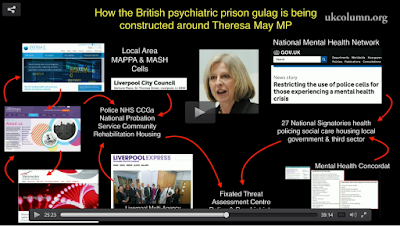 "OK, let`s put some of this together in another form. Yesterday we reported on the Liverpool local area MAPPA and MASH cells and the key point of this was that it was all around local agency. Well while the local cells are going on, of course, we`ve also got this national mental health network."


"So here was Liverpool multi-agency safeguarding hub MASH which is part of the multi-agency public protection arrangement, supposedly to protect us but, in fact, providing a sectioning net. These are all the people networked in the Liverpool area and each of the others, some sixty three areas across the country: The police, NHS, Care Commissioning Groups in the NHS, National Probation, Community Services, Rehabilitation and Housing.  And the other thing we warned about was this was all databased through a database system which also linked into private healthcare and IT companies."
"Well now what we`ve got is clear evidence that this is being pushed out on a national scale and the mental health Concordat  - we`ve just seen the scale of that. Those are all linked into the 27 National Signatories and let us also remember we`ve still got the Fixated Threat Assessment Centre which is the police working directly with psychiatrists in order to protect the great and good - politicians, pop stars. This is the woman at the heart of it all, Theresa May, unbelievably dangerous."


"And remember we are now at the point where you`re deemed mentally unwell if you challenge the government."


So this is in front of us - but Huffington Post here picking up on the fact that we`ve got more being pumped out by the Labour Party in particular. The Next Generation Shouldn`t Have to Cope on Their Own - It`s Time for Ministers to Act. This is all about the mental health of youngsters. And the article was put together by Lucy Powell MP,  Shadow Secretary of State for Education, and her team mate Luciana Berger, Shadow Minister for Mental Health. I`m not sure what her experience is for mental health..."


"But these two women say that one in ten children now has a diagnosable mental health condition - around three children in every classroom.  And estimates suggest that the cost of mental health problems to the country is now close to a £105 billion a year. So we`re being led to believe that children are significantly mentally ill, but if we have a look at Luciana Berger`s twitter page that statistic of one in ten has miraculously changed to twenty percent of children have a mental health problem."


"Now I actually spoke to one of the mental health charities before we came on air and asked them which statistic they were using. They said one in ten - but that is quite old - it was put together in 2004."


"So they`re saying in ten years the number of children with mental health problems has doubled ?"


"No they don`t want to say that," says Brian Gerrish, "Because when you ask them a question about the reliability of the statistics and what they`re doing they got pretty cagey about that."


"So following this lady through a bit more, what has Ms Berger been up to ? Well she`s backing Time to Change which is to get more mental health help in amongst children and what sort of people are getting involved? We`ve got the Duchess of Cambridge launching Children`s Mental Health Week and I`d just like to say against this we can see the stress on our children with tests, the exams, the changes to the type of education they get, political correctness. We`ve got Prevent anti-terrorism education and some pretty vile sexualisation of our children. It seems to me that it`s our politicians that are causing the mental health problems in the first place."


"And we can add a bit more to that because here we`ve got This is Liverpool CAMHS mental health. They`re also promoting this Time to Change initiative and where do we find this well this is part of the website Time to Change and they`re selecting leaders amongst schoolchildren to be trained in dealing with mental health issues."


"How does that work Mike? You`ve got young people - they`ve got enough problems with their own life, getting through school, getting used to themselves, growing up. Now they`re being made mental health experts and they`re going to be working amongst their school colleagues."


"Well, if you follow this website through, this gets pretty interesting as well because this is promoting another load of agencies all working around mental health with young people. And I ask the question, just who are these organisations and why should we let them get amongst our young people?  Alder Hey Hospital that`s very interesting. I`ve heard stories about Alder Hey experiments on children in the psychiatric department but apparently we should trust them. And as with the other one, on it goes: Spinning World, pretty interesting title that one; Action Youth; ADHD Foundation; Beacon Counselling Trust; Disability and Inclusion Team.  Clearly they`re saying young people have all got problems."


"So if we come back to what this organisation is about - Well here it is. A little bit of NLP.   Liverpool FYI, For your information it means Fun Youth Involvement - this is mental health Mike."


"Fun Youth Involvement is a group of young people who help to shape and inform Liverpool Child and Adolescent Mental Health Services. So we`re taking young schoolchildren, basically, and they`re going to be trained in mental health."


"I just pause here because it comes to the point where you do not know what to say. It`s so obvious what`s going on."


See the programme http://www.ukcolumn.org/ukcolumn-news/uk-column-news-9th-february-2016
Posted by Alice Moore at 11:17