Coverage of the Docherty case begins about 36.06 minutes when Alex Thomson informs viewers and listeners that the transcript of the Docherty interviews are now available on the UK Column website.

Here`s the link to the transcript: http://www.ukcolumn.org/sites/default/files/documents/Docherty.pdf 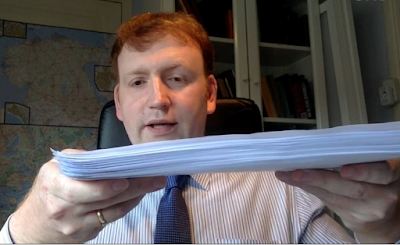 Alex Thomson  holds a print out of the pdf to show the huge document which will take the weekend to read.

"We now have a member of the Scottish parliament," he says, "who would not like publicity at this stage, looking at it seriously on behalf of the Dochertys, which is a first." He then spends a few minutes reading out the table of contents which gives a chronology of what has been done to the Dochertys.

When he gets to: "The suspected paedophile Alan Low immediately digs up the  Crimonmogate estate at night,"  he reminds viewers that they have a police source who has informed them that the bodies of children were dumped at sea after being dug up from there.

Moving on: "This is what the Dochertys are asking for help on right now. So if you`re watching in Ireland or Scotland particularly we would love to hear from you at dochertyinvestigation@ukcolumn.org."

"Here are their ten questions:"


"1. Is Jean Smyth the manager of social services in Letterkenny in Donegal in fact the wife of Regional Director John Smyth? "


"2. Who in the Irish government is trying to tell the Dochertys to place all the blame on the social worker in Mayo, Mary Malee, in order to deflect from the Dublin government?"


"3. What is the relationship between Sergeant John Forkan and Maria Houston who uses various name spellings who is the unqualified woman who the Dochertys believe has been looking after their son without qualifications and hitting him?"


"4. What is the background and motivation of the Donegal lawyer Liza Finegan ?"

"5. What is the current professional practice status and location of psychiatrist Dr Ciaran Smyth who tried to do a stitch up on the Dochertys?"


"6. What is the current official location and the current actual practice location of the social worker Gabrielle McDaid? It appears she lives in Londonderry, is registered in Londonderry and works across the international border in Donegal where she became runner up for Irish Social Worker of the Year without apparently being registered with an Irish public practice address. And allied to that: was Gabrielle McDaid registered to practice social work in the Republic of Ireland before June 2016 at the time she was dealing with the Dochertys?"


"7. What is judge Paul Kelly`s background within the Roman Catholic church?"


"8. Since the court appointed guardian Patricia Molony does not drive and we think she`s actually South African by origin but she`s been in Ireland and Britain, and doesn`t drive, who was it who got the police in Northern Ireland and Scotland to give them an escort as we think they had to take the children, against their will actually, to their maternal grandmother`s funeral in January 2016 in Perthshire in Blairgowrie we believe... Who gave them police escort? Who authorised it?"


"9. Who bought Laughton House in County Offaly for James Reilly who was the previous children`s minister in Northern Ireland because he`s known to be a bad debtor for nearly two million euros? And which entities and persons previously purchased for James Reilly a care home which he then had to sell? We believe that Reilly is penniless and being manipulated by Irish, British or other interests. Who bought his houses?"

"10. This is most important. Can the public notify us of any people connected with - anyone you can read about in this transcript - who are known or reasonably suspected to be, police informants or military intelligence informants, to have an allegiance to Freemasonry, to any criminal group or political gangsters or to the Roman Catholic church, especially if that allegiance is much stronger than they publicly intimate because people have sidled up to the Dochertys and pretended to be nominal catholics or ex Freemasons and you find out that they very much aren`t catholics and current Freemasons. And finally on point 10 can the public tell us about anyone connected with any of these people who is living a lie about their denominational affiliations, their sources of wealth, the amount of their wealth, their political loyalty or their sexuality or their nationality?"


Brian Gerrish adds the following comment: "We have been getting extremely good help that includes the police, and Alex, I have to put this in because you won`t be aware of this at the moment but we`ve also been receiving very good assistance from people that we know are Freemasons. So I`m going to gently suggest here that the rule should be to judge people by their actions but I`m able to say with confidence this lunchtime that we know that there`s huge disquiet within the masonic movement as individuals start to realise how deep and how dirty this criminal activity is."