An open letter to the Justice Minister, Republic of Ireland

Last Friday, referring to the Docherty case, David Scott said: "Things are moving at quite a pace now...We`re getting a lot of support and I want to thank people out there who are writing letters and asking questions...and providing us with information."

"The information is extremely interesting and has got a lot more interesting in the last 48 hours. We`ll see how it develops ...."

In the meantime, he wanted to highlight this car and this numberplate. 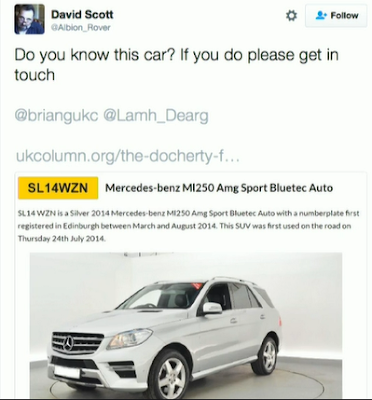 "This is ... an Edinburgh registered car, a 4 x 4 Amg Mercedes in silver ... It was behaving very suspiciously ... following the Dochertys around the very remote island of Achill on the West coast of Ireland and they thought it was very strange, so they noted down the numberplate. Now we don`t know what was going on here . We don`t know if it was anything nefarious. But if anyone knows ... who owned it in 2014, 2015, or who owns it now, please let us know."


The subject of the Dochertys was mentioned again on Tuesday`s UK Column News [2 August 2016] where Brian Gerrish was accompanied by Justin Walker and via video link by Alex Thomson. He looked at the response from the BBC, Nicola Sturgeon and others to the Brain family case compared to that of the Dochertys.

"The BBC are muddying the waters in order to protect the abusers of children They`ve had an internal investigation. They`ve cleared themselves and now they`re working extremely hard to clear other people who`ve been accused of the abuse of children." 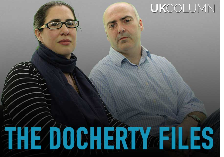 "This remarkable couple - I`m going to bring them up on screen - Janice and Brian Docherty - literally in fear for their lives. They`re living in Ireland at the moment. They`ve had to leave Scotland because of the threats and intimidation; their children taken at gunpoint. Why? Simply because they reported a man who they believed was a paedophile. They haven`t abused their children, harmed them, neglected them. They are now living in fear and nobody will talk about this case in Scotland; but the First Minister will support the Brain case."

"And let`s have a look at a letter that has been written [to] the Irish Justice Minister, Frances Fitzgerald ... I`ll try and read out the key parts of this letter."

"Now Mr Colgan is her secretary. So it`s an open letter. The Justice Minister`s apparent endorsement of the lawless persecution of the Docherty family:"

It says: "Thank you for your email on behalf of Ms Fitzgerald..."

"1. Early in 2015 a judge in an Irish court dismissed allegations against Janice and Brian Docherty, and ordered all persecution of this law-abiding couple to cease forthwith. In addition, this same judge ruled that the notes from Police Scotland on which allegations against the Dochertys were based were without merit, and should not be used to renew actions against the family either immediately or at some future date. This judgement, which has not been superseded by any other, continues to be utterly disregarded. In direct defiance of the judge`s decision, the Docherty children were once more taken from their loving home and put into care on 17 December, 2015, while their parents continue to be hounded on the basis of notes which have been declared in an Irish court of law to be fraudulent and worthless."

"Bearing in mind Ms Fitzgerald`s remit, which is to uphold the rule of law in the Republic, why is she permitting the decision of an Irish court to be held in open derision. Why are those who are so clearly defying an Irish judge`s ruling not being charged with contempt of court?"

"2. The Docherts have petitioned for Habeas Corpus in respect of their children, under Article 40 of the Irish Constitution, and their petition has been granted by the High Court. Yet this petition is being ignored."

"Bearing in mind Ms Fitzgerald`s remit, which is to uphold the rule of law in the Republic, why is she not ensuring that this fundamental provision of Irish law, and the independent decision of the High Court in the Dochertys` favour, is respected ?"

"Please note: Ms Fitzgerald is not being asked to arrest members of the Garda, or to intervene in an individual case: she is simply being requested to uphold judgements which have already been lawfully made by those appointed to do so."

"As things stand, a reasonable person can only conclude that the Justice Minister is uninterested in fulfilling her primary duty, which is to ensure that the rule of law is impartially maintained."

"Where is the jury in all of this?"

"No jury because it`s a family court hearing . So we simply have a closed court; a star chamber, in fact... And now we can see where that leads us and as UK Column has been warning and warning for many years we are now ... literally in the state where government can say: `We`re going to take your children. You can complain if you like.`  But then all doors are simply shut in your face."

"Now the BBC of course does not want to talk about the Docherty case. So what are they getting really upset about.? Well, Lord Janner. So we`ve now got their article and it`s going to be followed by interviews with his daughter who says that basically the whole thing against her father is an outrage . It`s attacking a corpse I think she says. The BBC is literally starting to spin to protect the establishment."

"And ITN is just as bad..." says Justin Walker. "Because they won`t go where the truth is."

"They certainly won`t go where the truth is... We`ve listed some of those cases there... And we have a BBC which is then exposed as having paedophiles in their organisation but they run an investigation ... to their entire satisfaction and then say : `Well, there isn`t a problem`. And the public is supposed to believe this; the same public that`s paying the £3.65 billion to run this operation."

Finally, a quote from Alex Thomson: "It`s one of the ways we do things to the envy of tyrants all over the world."

http://www.ukcolumn.org/ukcolumn-news/uk-column-news-2nd-august-2016
Posted by Alice Moore at 17:28