On UK Column News yesterday David Scott took the audience through some of the Police Scotland regulations 1996.

"This is the current regulations. We had an older, more traditional, common law requirement to `not commit a crime` called `breach of duty` in Scots law which is the equivalent to malfeasance in public office in England.  But it is quite an interesting list. Neglect of duty`s on that list: so it`s misconduct and neglect of duty. And `suppression of complaints` was a very interesting one.  So there are standards."

Brian Gerrish adds a comment: "A lot of people have got this impression that all police officers are bad. We`ve obviously fought that for some time. It`s clearly not the case. But what has been true is that there seems to have been a reluctance of police officers to actually speak out when they know something is wrong. And it does seem around the Docherty case that something has drastically changed because people are coming forward with information. But at the same time they`re showing that they are themselves scared of other elements within the police..." 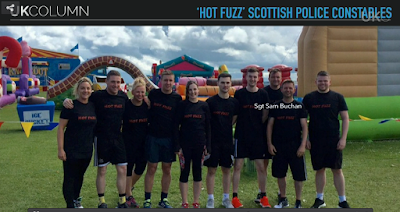 Sgt Sam Buchan, third from right on picture
"This is Hot Fuzz...[Police Scotland fun day] And we`re just going to bring up this gentleman. Now there`s been something funny going on around the name of this police sergeant, Sam Buchan. What can you tell us? We`ve got to be accurate here.  At the moment we`re looking at police officers, perfectly good reputations, all of them. What`s going on around the use of Buchan`s name?"

"Well, there are several identity issues that have been difficult surrounding the Docherty case and essentially as we`ve been investigating allegations made by the Dochertys everything we`ve managed to check has checked out, with one or two exceptions. In those cases the truth has proven to be stranger and more concerning than even the Dochertys knew; and they`ve been surprised at what we have, in fact, uncovered. Now one of the key players in this was understood by the Docherty family to be Sergeant Sam Buchan."

David Scott reads out an extract from Brian Docherty which appears in the transcript:

"Well, we lived between Fraserburgh and Peterhead at the time, on this Viscount’s estate. It was slightly closer, I’d say to Fraserburgh, so it was the local … I called this hotline 101 or, you know, the standard line, and they put me in touch with a local officer, called Sergeant Sam Buchan."

"He then goes on to outline what this officer did.  He organised an interview with two officers described as ideal who transpired to be very inexperienced. As that interview was going on, Sergeant Buchan was in another police office with Alan Low who`d approached and offered money to the Docherty family, and Viscount Petersham. That was only discovered later but that was what was going on. And then the very next day - so within twenty four hours - the sergeant was at the door saying to the Docherty family: `What can I do to persuade you that there`s nothing to see here?` And later on they found when social services descended upon them they eventually uncovered that the reason this happened was a report left in Police Scotland to social services. When the officer that authored that report was confronted, it transpired that the report that was submitted was not her report.  It was submitted when she was on vacation and was submitted by Sergeant Buchan."

"So it seems this Sergeant Sam Buchan was at the core of a great many of the problems. So we started to look into information about him and who he might be but what came out was a quite different picture. We found nothing to his discredit. We found his reputation in the local community was very high and we found him running marathons and raising money for charity and with what would appear a very happy family life and there didn`t seem to be any connection between the two pictures.  So when we took the photographic evidence that we got from mainstream media sources - Sergeant Sam Buchan has headed up several public campaigns in North East that have been run by Police Scotland to get kids off drugs and things like this - so his face is in the paper.  So we showed it to the Docherty family and they were quite clear: `No that`s not him. That`s definitely not him. Sergeant Buchan was older; he had grey hair; he had completely different features.  No that`s definitely not him`."

"So what appears to have happened is that they were thinking they were talking to Sergeant Sam Buchan; they were talking to a Police Scotland officer of sergeant rank; or wearing a sergeant`s uniform. But it wasn`t Sergeant Sam Buchan. So that strikes us as a very odd state of affairs and it raises quite a few questions. You know we have this officer who seems to be without anything to compromise his good name and yet his name was put into the frame for all of the wrongdoing that was surrounding the Docherty family. The Dochertys had no idea about this. So we wonder who has been passing himself off as Sam Buchan and why?"

"There was a police complaints procedure that the Dochertys initiated and then there were two police investigations by PIRC, the Police Investigation and Review Commissioner.  None of these internal investigations highlighted to the Dochertys that they were naming the wrong officer.  It didn`t seem to be picked up at all, which seems extremely odd if the investigations were thorough... And most of all we want to know who framed Sam Buchan?"

Brian Gerrish interjects: "You`ve mentioned two really serious things. You`ve mentioned that a report was submitted in the name of one constable when - I think it was a lady - she was on holiday. Very serious. Because that is fraud within the record system, from the police. And then we`ve got what appears to be misuse of somebody`s name whilst interacting with a member of the public. So these are very serious breaches and of course the other point that`s coming out of this is that perfectly decent police constables there north of the border are actually being brought into disrepute by the action of a few of their colleagues."

"Well, quite. And the officer PC Kathryn Lamont was the author of that report and when she was questioned about it by Brian Docherty she was initially quite hostile and then perplexed.  `I`ll phone you back`. She phoned back less than an hour later and offered to come and see Mr Docherty with her police union rep.  So clearly she was very concerned about the position she had been placed in.  And the report that had gone into social services was 180 degrees in another direction from the one she had written.  Rather than highlighting the concerns about the paedophile..."

"This is falsification of evidence, isn it?"

"Absolutely. It was telling the social services to lock on to the Docherty family and that that`s what the problem was. So it completely changed the nature of the report. It wasn`t a tweak; it wasn`t anything minor; it was night and day."

According to the transcript, PC Kathryn Lamont accompanied Sgt Sam Buchan when he visited the Dochertys to persuade them that there was `Nothing to see here.` Did PC Lamont know that the man calling himself Sgt Sam Buchan was an imposter?
Posted by Alice Moore at 17:09