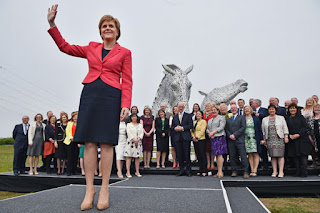 "THE controversial Named Person legislation cost the SNP its overall majority at the Holyrood elections, it has been claimed."


"In the weeks running up to Thursday's vote critics of the state guardian policy said they could not back a party which was willing to intervene with family life."


"The electorate turned against Nicola Sturgeon - who yesterday met with her 62 new MSPs at The Kelpies, in Falkirk - after her government insisted every child under the age of 18 should have a state appointed central point of contact such as a teacher or health visitor."


"Many vented their feelings on social media, calling the approach `Orwellian` and urging the First Minister to `sort it out` or lose support."


"They accused the Nats for lack of respect in human privacy and said they had no option but to abandon the SNP unless the scheme was scrapped."


"Even dieheart party activists admitted the policy was a potential stumbling block with Perthshire based SNP member Nicky MacCrimmon, a staunch defender of the initiative, writing ahead of the polling day: `Indeed, I have heard lifelong SNP voters say they are considering their vote in the light of the Named Person scheme.`"


"Online, a Scots voter going by the name Shona, said: `The named person scheme simply means that the SNP does not trust parents to bring up their children.`"


"`The named person scheme is draconian. Who is going to want to live in Scotland now when anyone can accuse you of anything with impunity. I regret voting SNP. I won’t make that same mistake again.`"


http://www.express.co.uk/news/uk/668151/Toxic-policy-kills-SNP-dreams-Named-Person-legislation-Nationalists-majority
Posted by Alice Moore at 22:18