Justice Committee not interested in justice for Melanie Shaw

It was Mike Robinson who began by pointing to an article in the A Register: The UK`s investigatory Powers Act allows the State to tell lies in court.

"Section 56(1)(b) creates a legally guaranteed ability – nay, duty – to lie about even the potential for State hacking to take place, and to tell juries a wholly fictitious story about the true origins of hacked material used against defendants in order to secure criminal convictions. This is incredibly dangerous. Even if you know that the story being told in court is false, you and your legal representatives are now banned from being able to question those falsehoods and cast doubt upon the prosecution story."

"Potentially, you could be legally bound to go along with lies told in court about your communications – lies told by people whose sole task is to weave a story that will get you sent to prison or fined thousands of pounds."

`Evidence not wanted by Justice Committee`


This is the caption at the top of the screen where child abuse whistleblower Melanie Shaw`s situation is summarised.

"For her last hearing Melanie was denied a court appearance in person and was given a Skype link instead, but was cut off when the Judge objected to her statements. The Judge has demanded another psychiatric assessment, believed to be the third and it looks like the state wants her sectioned. No application for bail has been made... "

"A mysterious prison probation officer has instructed Nottingham City Homes to evict Melanie and her possessions will be disposed of on 16 December 2016 unless they are claimed."

Brian Gerrish continued: "Well, we`ve just heard, if you like, the documentary evidence as to what is happening in the justice system - if we can call it that. Let`s have a look at the practicalities. So we`ll bring in Melanie Shaw and I`ll just say we`ve been able to hear a recorded phone conversation with Melanie. This has been heavily redacted but let`s just remember this lady has now been in prison for over seven and a half months. During that time she`s been kept in solitary confinement - so only out of her cell for half an hour for a shower - no interaction with other prisoners, no access to the long term medication which she`s needed to survive since she was a child abuse victim in Beechwood children`s home, Nottingham. Under immense pressure, lied to by the prison staff, visitors blocked, mail blocked."
The recording of Melanie can be heard at 9.19 minutes... She ends by talking about the eviction and wonders what is going to happen to her cat. She asks for Christmas cards from the public as that is all she has to look forward to.
"Well if that doesn`t affect our viewers and listeners today I don`t know what would. This is the reality of Theresa May and David Cameron`s conservative Britain. There is no justice. Child abuse whistleblowers, far from being helped and supported are locked up, in solitary confinement for over seven and a half months. That is the definition of torture under the United Nations rules at least and that is the so-called justice meted out to child abuse victims in  the UK."
"So Melanie`s still unsure what she`s actually been charged with. She`s apparently due to be sentenced in January next year but she`s also said that she believes she`s going to be charged with a whole range of other things which have supposedly been happening in prison.... So Melanie said many other things. We can`t share those with the public for a variety of reasons, but that little audio heavily edited, I think it gets out an impression of what`s happening."
He then referred to a letter to a member of the public from Bob Neill, Chairman of the Justice Committee. "Now let`s have a look at what the state says about things..."

"Thank you for your letter of 23 November."

"I should first make clear that appointment of MPs to select committees is a matter for their political parties and the House as a whole. It is not a matter for the committee concerned or its Chair. My duty as Chair of the Justice Committee is to work with all MPs duly appointed to the committee, and I do not comment on any individual members of the committee."

"You ask me to use my powers to end what you describe as the victimisation of child abuse whistleblowers, and to support the release of Melanie Shaw from prison. I am afraid the Justice Committee is not permitted to intervene in individual cases, so neither I nor the committee have any powers which we could exercise in relation to her case. This is a matter for the legal process, it`s also a matter on which her constituency MP may be able to assist her." 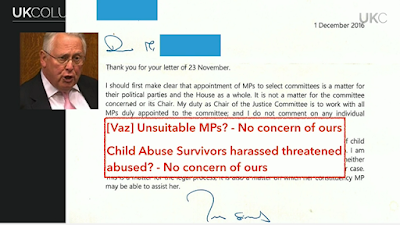 "So basically it doesn`t matter what the crime is, it`s no concern of the Justice Committee.  Well yesterday I had a chance to speak to the Clerk of the Justice Committee. Now this is 5 minutes long.  I`d encourage people to stick with it. Listen to what this man says to me bearing in mind here is an advert from the justice part of the government`s website which says: Watch our bite-sized guide on how committees in the House of Commons gather evidence and how you can get involved." The audio starts at 14.19 minutes. 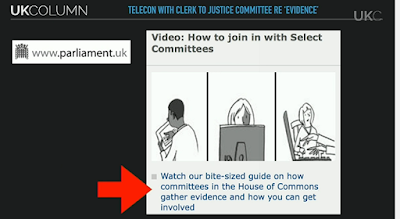 Brian Gerrish quoted the second paragraph of the letter to the Clerk of the Justice Committee and then said: "That paragraph leaves the public in complete no man`s land because the whole reason there`s public interest in this case is because of the total breakdown of justice procedures..." In response the clerk repeatedly told Gerrish that he was not allowed to intervene in individual cases. "It`s not a question of intervening, it`s a question of the Justice Committee paying attention to what`s going on here because the government should be held to account."
It was hopeless, even when Gerrish attempted to get the clerk to speak in more general terms about the right to appear in person in a court of law, he would not. Finally Gerrish said: "Just explain to me in simple layman`s terms then what the committee does?" There was an awkward pause...

It was agreed by the UK Column team that the Justice Committee was set up in such a way that it would never have to examine individual cases. 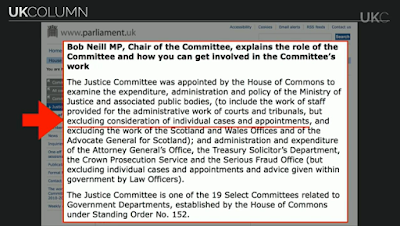 After the phonecall Gerrish spoke to the audience: "It`s so clever, you say where`s the evidence? Well the evidence that the system isn`t working is held in individual cases ... [That] evidence is the evidence which needs to be brought forward so that failures of government and judicial organisations can be dealt with. But no no no. We don`t want to see real evidence. We want the boss of the prison service to tell us how wonderful his prisons are."

"This is straight out of East Germany."