Great concern has been expressed about the Docherty family and there has been a wonderful response in terms of contributions made to their cause.
Regardless, as UK Column and David Scott explain communication with the family is spasmodic and uncertain.
Meanwhile the announcement was made of the Scottish Meeting in Glasgow on 30 November 2016. 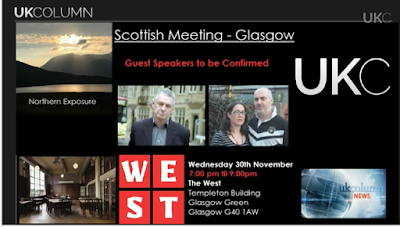 Despite everything going on in his life, including family problems, it was pronounced that Robert Green, who has done some sterling work on behalf of the Dochertys, will be appearing at the WEST in Glasgow. [He may have to leave early at that meeting.]

David Scott said that they did hope to have the Dochertys at this meeting but due to a breakdown in communication that may not be possible.
Posted by Alice Moore at 16:40