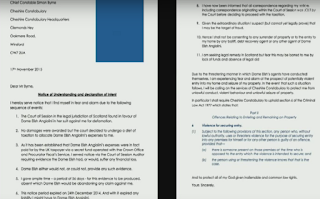 In the event of violent entry into his home and seizure of his property, Robert Green called on the assistance of Cheshire Constabulary and quoted Section 6 of the Criminal Law Act 1977.
The main body of the letter explains:


That letter was drafted a year ago and things have moved on.

Coverage begins at 44.50 minutes:
"Robert Green has received a communication that shows he`s still being pursued by the Scottish state. This time they`re chasing supposed court expenses -  court case run by the Scottish government while trying to make out that a private individual was responsible. But they are now threatening to send bailiffs to his Chester home."

"So if anybody can be available to help support Robert, please let [UK Column] know and [they will] give further contact details."