Global Cities: a big one to watch 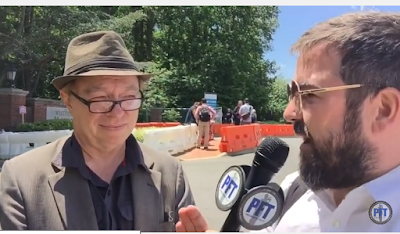 "What sort of things are on your radar now as far as Bilderberg is planning this year? " asks Dan.

"Well certainly there`s the unusual number of journalists this year I`m looking at, and the head of Cern ... One that is not on their official agenda is the Global Cities programme. The Chicago Council on Global Affairs - a bird of a feather ally with Bilderberg - is meeting June 7- 9,  Chicago .... I covered their meeting last year because I couldn`t go to Bilderberg in Dresden, Germany, and that was their first. This is their second Global Cities forum and it was covered today June 2nd at the UKColumn.org."

Mark Anderson goes on to explain what the Global Cities programme is. "It is about having the cities network together to succeed from the nation states they inhabit. So the people in the Bilderberg orbit - Bilderberg is part of a larger network -  look at cities as being quasi-independent where they don`t have to obey their whole nations. They can embrace climate change and embrace carbon credits and all these things that are supposed to counteract so-called man-made climate change. They can embrace that, even if a national leader doesn`t. They can embrace Sanctuary Cities even if the national leader of their home nation wants border controls ... So it`s sort of an ideological and operational succession."

Anderson explains that even though it was not on the agenda this year, Smart Cities was discussed explicitly at Bilderberg  in 2014 in Denmark... "The topics don`t die the year they`re discussed. Some of the topics they discuss carry over ... they`re long-term evergreen type of projects.  Global cities is one of those things. So Chicago Council on Global Affairs is a big one to watch." 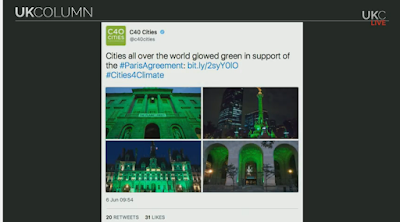 The topic of Global Cities - also known as Smart Cities - appeared once again on UK Column News (6 June 2017) and this time the absurdity of the climate change propaganda was pointed out. If everything needs to be done to conserve energy in order to save the planet, then the strategy that smart cities have of coordinating their green messages - and other messages -  across the globe through their lit up buildings is proving to be Orwellian doublespeak.
Speaking of which viewers and listeners were also informed that the UK`s first ever live start-to-finish reading of George Orwell`s novel 1984 is on Tuesday 6 June 2017.
https://orwellsocietyblog.wordpress.com/2017/05/26/1984-live-tuesday-6th-june-2017/