State interference in a fairer Scotland ?

Members of the public who attended an event to discuss how to build a `Fairer Scotland` took advantage of the meeting to raise their concerns about the named person scheme.

"Former teachers attacked plans to appoint a named person for every child during a ministerial event in Glasgow."

"Social Justice Secretary Alex Neil was criticised as members of the public were asked for their views on how to create a ¬Fairer Scotland."

"The event, at the disused Govanhill Baths, was tabled as a discussion rather than a question-and-answer session but turned heated as the Government`s named person scheme became the focus. The child protection measure is already being piloted in parts of Scotland including South Ayrshire, Highland, Edinburgh, Fife and Angus."

"One retired teacher accused the government of `sending spies into people`s homes.`"

She said: "We should be giving teachers less work and not more. I can`t see how Scotland can get fairer when we have this level of state interference in the family." 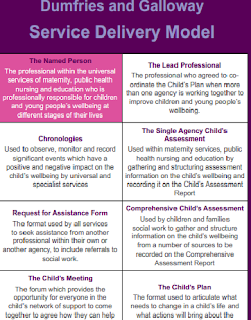 A document produced by Dumfries and Galloway for practitioners exemplifies the level of intrusion that is planned.

It states: "From the point of conception until the transition to adulthood, practitioners in the universal services of maternity, public health and education, have a vital role in understanding and promoting children’s wellbeing, supporting parents/carers to understand and carry out their responsibilities as well as contributing their own professional skills and experience. "

Practitioners have a vital role from the point of conception?  Mind boggling.

Push back the point of surveillance further and we are into very dark territory. Elsewhere there is mention that there are no pre-conception services  - not yet anyway - but forced sterilisation for those judged to be unfit springs to mind. One small step and we`re there !

"A child’s wellbeing develops as a result of their very earliest experiences and gathering evidence of a child’s wellbeing should begin in pregnancy with the midwife, assessing the parents’ capacity to provide wellbeing for their baby. Assessing the child’s wellbeing will carry on through the early years with the public health nurse paying attention both to the quality of parenting to support wellbeing as well as the child’s own growth and development. Education staff in the early years will also observe the developmental wellbeing of a child as they make their way through primary and secondary. Evidence of wellbeing will be increasingly based on observations of and interactions with the child themselves."