Melanie Shaw and a `trial of facts`

"We don`t normally start with an apology but I`ll give the apology. We`re going to show you a little bit of what Google has been doing but this is in relation to the court case of Melanie Shaw. So let`s have a look." 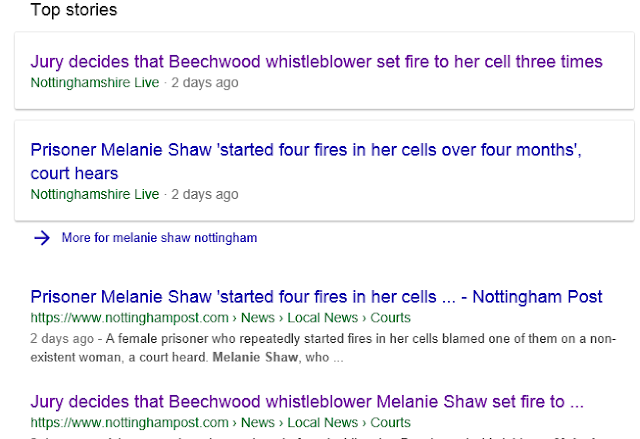 "Fascinating that after months and months and months of nothing about Melanie Shaw on Google. When you search her story, you search Nottingham child abuse, you search for Beechwood home, all of the information had gone down, nothing of the original story from the Nottingham Post or the BBC or any of the other so-called mainstream media, including the big named papers, of course, the Telegraph and the Guardian, absolutely nothing. Melanie`s now been through a particularly vile court hearing and suddenly she`s all over the internet. Just a coincidence Mike?"

Mike Robinson: "Yes, so first and second on the front page there. But has Melanie been through a court case ?"

"Well we`re going to have a little bit of a discussion about that. Let`s just look at what`s come out so far and we`ll go to the Nottingham Post because they`ve obviously taken great delight in reporting this. And so here we are; here`s the headline: `Jury decides that Beechwood whistleblower Melanie Shaw set fire to her cell three times. The defence offered no evidence in the case. Shaw was deemed unfit to stand trial so a finding of fact was conducted in her absence. The jury of five men and seven women took less than an hour to find that Shaw did the acts. They were instructed to reach a not guilty verdict on a further count of arson`. So quite interesting reporting here Mike because they do say that she was absent but then the whole style of the article, it`s as if what was said had come out of the mouth of Melanie Shaw."

Mike Robinson: "Well OK. But the first thing you notice here is they`re talking about a `finding of fact`. We`re going to talk about this a little bit later."

"Indeed. So let`s just put some of the key points up on the screen." 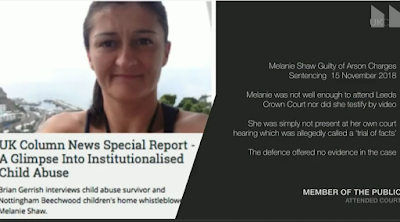 "So Melanie was found guilty of the arson charges. Now I understand the sentencing is on the 15th November 2018. I have seen the 12th of November reported in some places but I think it`s the 15th. People are very welcome to correct me if I`m wrong. Melanie was not well enough to attend Leeds Crown Court nor did she testify by video. She was simply not present at her own court hearing which was allegedly called a `trial of facts`and the defence offered no further evidence."

"Now what was actually going on here Mike? A lot of people who attended the court case were totally bemused at how there could be a court case with a jury and no Melanie called. I also believe there was no psychiatric expert in court to explain why Melanie wasn`t present. That may not be correct but I believe that was the case. So what was this trial of facts?" 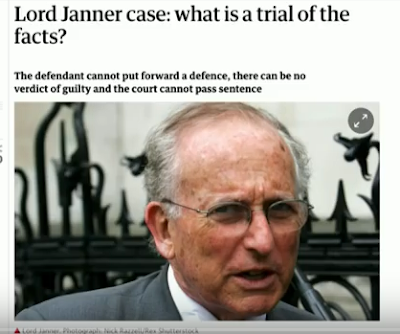 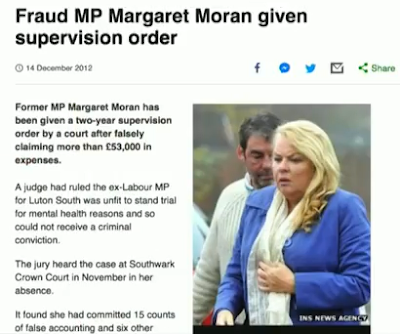 "Now this article about Janner is from 2015 but I just wanted to follow that up with the BBC article Fraud MP Margaret Moran given supervision order. And that says that a judge had ruled that an ex-Labour MP was unfit to stand trial for mental health reasons and so could not receive a criminal conviction. The jury heard the case at Southwark Crown Court in November in her absence. She was given the supervision order and the order is to be supervised by Southampton City Council."

"So if we go back to the middle paragraph of the Guardian article it says all a court can do is make a hospital order, a supervision order or an order for the defendant`s absolute discharge."  Referring to the Melanie Shaw case Mike Robinson says: "Discharge is unlikely to be the case, so it`s got to be the other two. If it`s a hospital order then that`s what they get Brian because it puts Melanie into the psychiatric system which is where they`ve wanted her all the while and of course that would be indeterminate in terms of length of incarceration. And if it`s a supervision order then in that case she would be supervised by the very local authority that supervised the abuse that she suffered in the first place. This is pretty obscene."

The discussion continues on UK Column News at 6.02 minutes.

https://www.youtube.com/watch?v=OH_eObNOiVQ
Posted by Alice Moore at 16:41