In defence of the realm 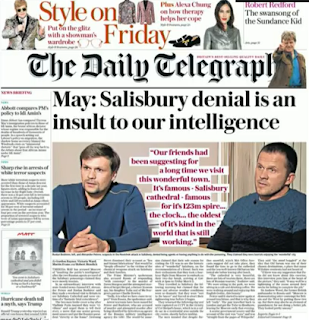 "Well this headline caught my eye and I just thought how incredible this one is. The Daily Telegraph `May: Salisbury denial is an insult to our intelligence`. The moment I saw the Intelligence there I thought, yes, British Intelligence, and that is exactly what is going on. I think the Russians are taking the mickey now because this is a pantomime and a charade and I think what we`ve got here is the Russians starting to play it. The real insult to the British public is British Intelligence."

"We`ll just go through a little bit on this to get a flavour for it. But we`re going back here to some statements MI6 made last year. `Jeremy Corbyn is a danger to this nation. At MI6, which I once led, he wouldn`t clear the security vetting`. So that`s a pretty hard statement. At the same time the Mail got stuck in: `Britain`s former top spy claims Corbyn`s links would see him fail the vetting process if he applied to join Britain`s security services but warns if he becomes PM he will be running them`."

"So we`ve suddenly got this outpouring of Britain`s Intelligence Services warning us about people like Corbyn. Can we trust British Intelligence?" 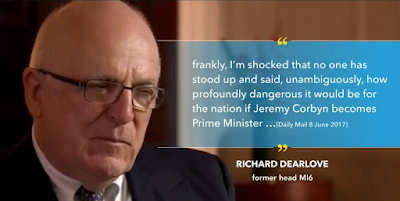 "Well, let`s just follow through some of the statements. Here`s Mr Dearlove. He said, in more detail, `Frankly, I`m shocked that no-one has stood up and said, unambiguously, how profoundly dangerous it would be for the nation if Jeremy Corbyn becomes Prime Minister.` (Daily Mail 8 June 2017)"

"That`s quite a statement from a Civil Servant isn`t it? `So let me be clear: the leader of the Labour Party is an old-fashioned international socialist who has forged links with those quite ready to use terror when they haven`t got their way: the IRA, Hezbollah, Hamas... As a result he is completely unfit to govern and Britain would be less safe with him in No 10`."

"And on it goes: `I can give an indication of just how serious this is: if Jeremy Corbyn was applying to join any of this country`s security services - MI5, GCHQ or the services I used to run, MI6 - he would not be cleared to do so. He would be rejected by the vetting process. Far from being able to get into MI5, in the past, MI5 would actively have investigated him... And yet this is the man who seeks the very highest office, who hopes in just 24 hour`s time to run our security services ...` [Daily Mail 8 June 2017]..."

Brian Gerrish: "So they`re absolutely hammering here... Well what`ve got? Well we`ve got MI6 here of course labelled as making blunders over weapons of mass destruction. And the Chilcot Inquiry, whatever we say about it, it did produce information pointing a finger at MI6. So we went to war based on information which was fabricated and MI6 was clearly implicated in the fabrication of that evidence."

Mike Robinson: "That`s all in the past Brian. It doesn`t happen any more."

Brian Gerrish. "Well, I`m bringing it to the surface now, Mike, because the hypocrisy of this man is just unbelievable, pointing a finger at Corbyn and saying Corbyn is a dangerous man, when we`ve got these people taking us to war. Millions have died on the back of their lies, but Corbyn is in the spotlight. Remarkably, a Tory, Brookes Newmark, who boasted that he was on the border with General Idris ... was linked through to Al Nusra. Was this ever investigated by MI5, MI6? I don`t hear anybody speaking out about this." 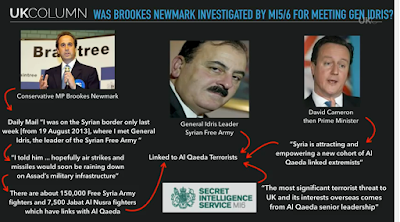 Mike Robinson: "Well he was probably there on their behalf."

Brian Gerrish: "Well we don`t know but we did have the same MI6... saying the most significant terrorist threat to the UK`s interest overseas comes from Al Qaeda senior leadership. So what is going on in British Intelligence? The stories don`t stack up. I think we`re looking at street theatre. People are dying; there`s no question of that, but lies and obfuscation coming out of these supposedly very important authorities."

"And that brings us into this. We`re going back to October 2017 here. But here`s the Telegraph: `MI5 knew of cover-up over Cyril Smith child abuse inquiry hears`. And here`s the Shropshire Star. I encourage people to go to this article because it`s very detailed. And they say: `Spectre of collusion` raised by MI5 dossier on Cyril Smith child abuse claims. So MI5 was told by Sir Thomas Hetherington,  the Department of Prosecutions in 1979, that his office falsely told the press that they had no record of a police file of evidence against the politician. In reality, prosecutors had been given a file in 1970 saying the allegations against Smith, made by eight boys associated with the Cambridge House Hostel in Rochdale `stand up`, but chose not to take him to trial. There is also a reference in the covering letter to another child sexual abuse investigation into Cyril Smith by the Metropolitan Police Service in the mid 1970s. Again, why would MI5 hold that information? Why was MI5 involved at all? We say this dossier from MI5 raises a spectre of collusion`."

Brian Gerrish: "So we are to believe MI5 or MI6 when it`s to do with what`s happening overseas or dictators, but when it comes to what is really going on in our country - they don`t feel the need to do anything."

"So the Guardian picked up on this as well. `MI5 knew prosecutors lied to press about Cyril Smith case, inquiry told`. And I`ll go through this quickly because we`ve got a lot of material today, but here`s Andrew Parker quoted in these articles giving the first public speech outside the UK by a serving head of MI5. Mr Parker [Director General MI5] told an audience of security chiefs in Berlin that Europe faces sustained threats and sustained hostile activity from certain states ... `Let me be clear - by this I don`t just mean spies spying on other spies, spies following each other around at the dead of night - I mean the deliberate targeted, malign activity intended to undermine our free, open and democratic societies` ..." [Shropshire Star]

Brian Gerrish: "Now this document is freely available on the internet. By its source data it appears to be a genuine document which has come out of the IICSA inquiry and this is one page of a letter from MI5 into the inquiry... It`s giving the detail around these dossiers." 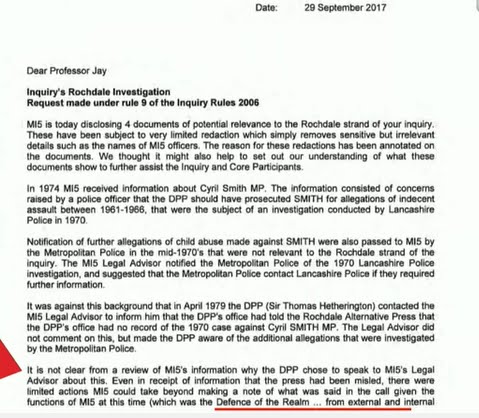 "But the amazing thing, down at the bottom, is that when they said they didn`t do anything, they said: `well our primary role was Defence of the Realm`. So we`ve got politicians who were repeatedly abusing young boys. MI5 knew. They did nothing and the reason, they say in this letter - we take this to be genuine - is because of `Defence of the Realm`. Does this mean they were defending child abuse in the realm Mike?"

"I would read that as, in order to defend the realm, they had to protect the operatives of the realm, being the polticians." 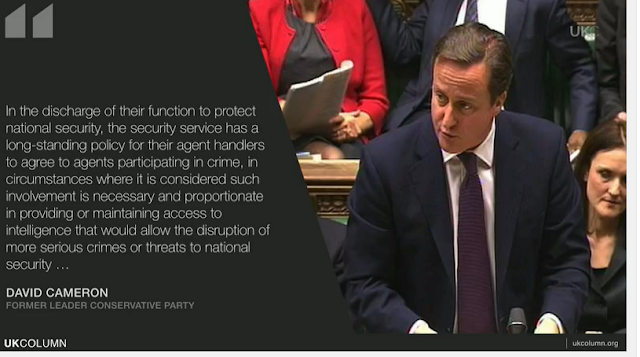 "So remember they were the same intelligence services that were covering up the abuse of children by politicians, in order for what advantage ? To bring a large number of politicians to court for abusing children? Well, clearly that wasn`t the case because there`s no prosecutions were ever brought. Criminality at the heart of the deep state Mike."