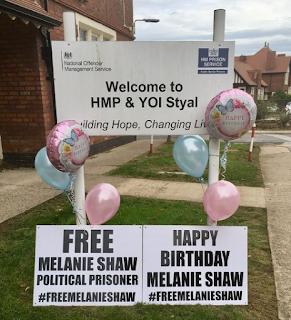 BEECHWOOD - THE RAPIST- THE JUDGE AND MELANIE SHAW

The IICSA is currently continuing at Trent Bridge, Nottingham, focusing much of its direction into the shocking catalogue of sexual crimes that have taken place at the Beechwood Home.

Inexplicably, this investigation is being allowed to continue without the most crucial witness of all, former Beechwood victim Melanie Shaw, from being allowed, by the state, to provide the IICSA with her detailed and extensive evidence.

She remains a prisoner at HMP Styal, even despite the recent suspension of its governor, Mahala McGuffie.

Thus, the IICSA`s investigations into the Nottinghamshire issues cannot possibly carry any real credibility until Melanie`s evidence has been considered.

So serious is the evidence that Melanie, unlike some other victims of Beechwood, has refused to accept a gagging order along with any financial compensation offered for her ordeals. Her evidence will highlight the existence of a local well-connected and sinister network that has been responsible for the continuation of these outrages over a period of many years. It is likely that the true number of victims from Beechwood alone will turn out to be absolutely staggering.

It is also the case that there are unlikely to be any of the usual issues of race or religion connected with the crimes. It would appear that the perpetrators will be found to be overwhelmingly white and some to have even held positions of influence in the Nottinghamshire area.

It must be beyond any reasonable doubt that the sole motive for the state`s astonishing efforts to silence Melanie is that her evidence will prove to be explosive for those who have previously held or currently hold offices of power locally and even beyond..

A key individual frequently mentioned by the IICSA is Andris Logins, a former Nottingham social worker who was jailed for 20 years in 2016 for committing four acts of rape whilst at Beechwood, around the same time that Melanie was a resident there. Moreover, Logins was aided and abetted in his crimes by his wife, Helen, another employee of Nottingham Council, who criminally abused her position by providing her rapist husband with confidential information about his Beechwood victims. She received a twelve month suspended sentence.

Unusually for such a dangerous serial rapist, Andris Logins has an acknowledged friend who is member of the judiciary, a judge still serving in the Family Court at Nottingham, where he currently and rather bizarrely, continues to make decisions after taking evidence from the same Nottingham Social Services.

His name is Judge Jeremy Lea.

Judge Lea also employed his rapist friend to work, a few years ago, at a charity the judge directed called Faith in Families, set up to assist in adoption cases.

Given his obvious and likely in-depth personal knowledge of a key dangerous sex criminal, it would surely be a good idea for the IICSA to invite Judge Lea to offer evidence to the Inquiry, as he may well be in a position to not only provide more information about the background and true extent of his friend`s crimes, but also to offer some guidance about the network that has protected and sustained Logins and any of his accomplices for so many years.

I have already informed the IICSA`s Junior Counsel, Paul Livingston of Outer Temple Chambers, of this situation and have passed on these details to Dorota Krawczyk, at Professor Jay`s office.

It is surely time for the full evidence to be placed before the IICSA panel for thorough consideration.

Disturbingly, Professor Jay has already indicated her belief that "dark forces" are intending the IICSA to fail in its task.

Whilst she gave no information of whom these "dark forces" may be, no third parties, whether organs of state or not, must be permitted to compromise the independence of the Inquiry by interference, including any obstructions or even threats to be made against Professor Jay, any of the IICSA team and most importantly of all, against Melanie Shaw and any other victims or those with information who possess sufficient courage and decency to come forward with their evidence.