Children must not question the government or the media 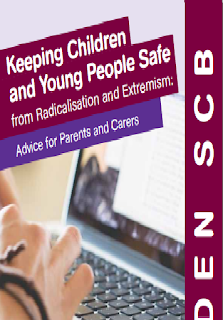 "Child protection officials [have] been criticised after warning parents that young people who take issue with government policy or question what they are told in the media may have been radicalised by extremists."


"A leaflet drawn up by an inner-city child safeguarding board warns that `appearing angry about government policies, especially foreign policies" is a sign "specific to radicalisation`."


"Parents and carers have also been advised by the safeguarding children board in the London Borough of Camden that
`showing a mistrust of mainstream media reports and a belief in conspiracy theories` could be a sign that children are being groomed by extremists..."


"Council officials and local politicians sit in the board, as well as local voluntary groups and community organisations. Local Safeguarding Children Boards are mandated by the Government all around the country under the Children Act 2004."


"Children should be encouraged to take an interest in politics and think critically about what they see in the media, not deemed suspect for so doing," she said.


http://www.independent.co.uk/news/uk/politics/young-people-who-question-government-policy-or-the-media-may-be-extremists-officials-tell-parents-a6756086.html
Posted by Alice Moore at 01:02