The NSPCC, never shy of shock tactics, or making a case without producing evidence, has decided to have its annual conference in Scotland.

It is at conferences such as these where speakers are intent on driving the professionals, clinicians, experts and policy makers to look beyond the boundaries of their existing fields in order to push the case for early intervention.


"There is growing recognition of the need for early intervention to prevent child abuse and neglect and improve children's life chances. "

When they talk about early intervention they mean intervening in family life before a crisis occurs. Where is the evidence that early intervention prevents child abuse? Although the number of children taken into care increases year on year, the number of murdered children certainly has not fallen. It looks more like, despite the lessons learned and the conferences, the wrong children are taken into care. They go on:


"Together delegates will explore the crucial challenges we face in our approach to child welfare and protection and share the latest research and best practice from both infant mental health and child protection social work."

Then there is this bombshell - they use the same debunked brain scans of the two three year-olds to support their case.

Isn`t it about time, instead,  that social workers were taught that these images show two different head sizes?  Since when did research indicate that neglect shrinks the skull of a child?

In fact, the images are more misleading than that.

It looks like the spokesperson for the NSPCC has stepped too far beyond the boundary of his field, and maybe that is not such a brilliant idea! 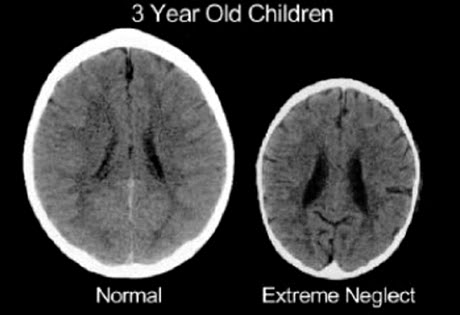 From the the Guardian:

"Val Gillies, a researcher in social policy at South Bank University, takes the scans head-on. "That illustration of the walnut brain is from a paper by Bruce Perry. There are no details given of the case histories of those kids. We don't know what 'normal' was. We don't know what 'extreme neglect' was. We don't even have a scale on that image. It's had the most powerful impact, but I've never seen another image like that. When people say, 'I've seen a brain scan showing what neglect does to the brain', that's the image they're talking about."

"Immediately, there are a few things wrong with this: with no details on the case study, except for the fact that "extreme neglect" meant life in a Romanian orphanage, we could be dealing with anything, from the effects of malnutrition to a disability. But even without the drama of the image, the use of these extreme populations is misleading."

"Aside from the dodgy science, if you look at who's pushing this stuff, it's wealthy philanthropists, Heinz, Carnegie Foundation, with the same notion, that the ills of society are located in the lower orders."