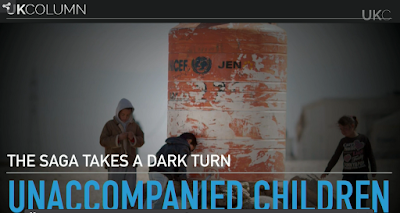 "Well this has hit the news today," says Mike Robinson. "It`s taken a very dark turn in my opinion.... Of course, we`ve been talking about this extensively over the last several months because of the number of unaccompanied children who have disappeared in this country since they were brought here..."

"The first group of unaccompanied children are arriving from Calais because they`re taking down the Calais camp and this is following, the government says, the Home Secretary`s pledge to transfer as many minors as possible before the camp is cleared. So this group, they say, were aged between 14 and 17. They were taken across the channel this morning and they were screened and processed by the Home Office and, well, they`re saying that more children are due to arrive from France... And so it goes on...and they`re going to be handed over to families that are already here."

"Of course the mainstream press covered this widely. `Now the first Calais children, in inverted commas, arrive in Britain: Migrants who claim to be aged 14 to 17 are reunited with their families in the UK as French prepare to demolish Jungle camp`." 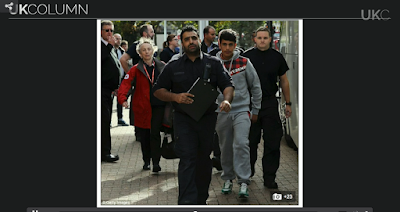 "And we started to see images like this: This apparently is a 14 year old dressed in a grey hoodie and jogging bottoms escorted by Home Office officials in Croydon." 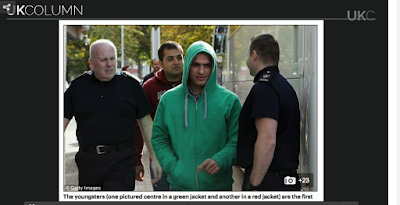 "This is one doing the rounds of the twittersphere . This is another youngster. Does he look like a youngster Brian?"

"Well the answer to that is `no` although I was going to say he looks older than the politician we had on the other day. But he certainly doesn`t look a youngster."

"So then we go on. UK Borders Force staff escort the first group of unaccompanied minors and this guy is supposed to be 14 to 17 ... And so it goes on." 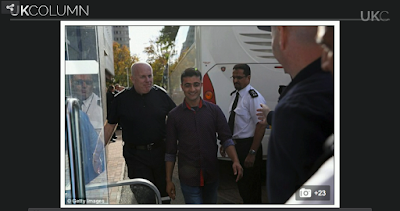 "So of course this has had a huge reaction on the twittersphere. People [are] going mad because these photographs are showing these unaccompanied minors and they`re saying that these are terrorists coming into the country and all this kind of thing."

"These photographs are absolutely staged. There`s no question about that. And so people are getting wound up about whether these are young children coming into this country or whether they are older people masquerading as unaccompanied children coming into this country. Just think of the effect that that has. First of all, it starts winding people up , making people fearful about terrorists coming into the country. Second of all, what it absolutely does is completely undermine any kind of pressure on politicians, including Tim Farron and others, about the fate of genuine unaccompanied minors coming into this country. What happens when they get into the care system? They disappear out of the care system into sexual slavery, into other kinds of slavery."

"This of course is a big topic for Theresa May this week. She`s been talking about it extensively. She mentioned it at the Tory party conference. She said that her biggest worry in life was child sexual abuse and slavery. And she`s doing nothing about it. And this is absolutely a staged story which the mainstream media are running right across every newspaper in order to wind people up and divert attention away from the issue of children disappearing through the system into trafficking networks ..." 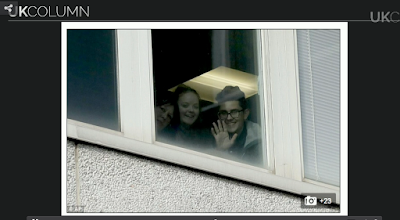 "There was one image in the Daily Mail article which perhaps is a bit more likely. We`ve actually got a girl in it, for example. As well, these two look significantly younger than the other photographs. But I think we`ve got to be pretty careful and pretty discerning about what we see in the mainstream press and start asking questions before we just start pushing stuff out over twitter which is pretty inflammatory."

http://www.ukcolumn.org/ukcolumn-news/uk-column-news-central-banks-lose-plot-eu-foreign-ministers-reject-boris-18th-october
Posted by Alice Moore at 16:29