Mike Robinson says: "This goes back to the beginning of the year when Tim Farron was demanding that refugee children from Syria are taken into Britain and `helped` in inverted commas. And the point I was making at the time was that Britain can`t even help British children who are in care; and to bring Syrian refugee children into the country is taking them out of the frying pan into the fire."


"Now I`ve labelled this as facilitating child trafficking and I`ll explain that in a second. But basically Tim Farron refused to answer the simple question at the time from me: what he would do to prevent children that are being brought into this country as refugees, being put in care; what he would do to prevent them disappearing into the system, or more importantly, disappearing out of the system into child trafficking rings? Would he be tracking these children until the age of eighteen, personally? And he refused to answer."


Following an appeal to put pressure on Tim Farron , a member of the public wrote to the MP:


"I was very pleased to hear the news you will host an urgent summit to discuss unaccompanied asylum seeking children who have fled conflict, poverty and persecution."


"I feel this is long overdue and perhaps a little late. I am hearing the closing of the stable doors after the horses have bolted."


"As we have the national disgrace of approximately 140,000 children going missing in Britain every year, how on earth do you imagine you can, through a series of meetings, sub groups, press releases and the usual political bumph, secure the safety of all unaccompanied Syrian children?"


"And so she goes on, " says Mike Robinson of this correspondent but there was no reply from Mr Farron until the woman said: `Mr Farron are you hiding?  Please answer my emails`."


"... According to the Home Office 2010 figures, 140,00 children go missing in the UK each year and most of those children come back. Some of them don`t. And the key point we were making at the time is that nobody knows. Nobody knows how many children disappear, not only from the care system but from society at large...So this report here was from 2012 - the All Party Parliamentary Group for Runaway Missing Children and Adults... And well basically they were saying that there`s a scandal going on in England involving children missing from care..."


"... And until recent cases of child sexual exploitation in Rochdale and other places put the spotlight on this issue, it was going on pretty much unnoticed."


"So let`s just have a look at what Tim Farron had to say. He said: `Like you, I was shocked and appalled to see the figures last month which showed that hundreds of refugee children are currently missing in the UK. These numbers are ... disgraceful. Unaccompanied refugee children are some of the most vulnerable in our society and it`s likely that many of these missing children will now be in the hands of traffickers and gangs."


"That`s quite an acknowledgement from Tim Farron.  He went on to say:  `The government must urgently review its processes to ensure that children can`t simply vanish from care. Once parliament returns from its recess period on Monday, I will formally ask the new Home Secretary to provide details about what concrete measures her department is taking to ensure that unaccompanied refugee children who arrive in the UK are monitored and kept safe by the relevant authorities and locate the hundreds of refugee children who have gone missing in the UK in the last five years."


"Well, the key point here Brian is ... the government must urgently review its processes. But no mention of a police investigation." 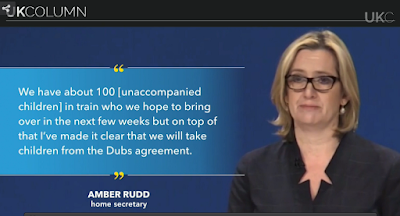 Speaking on UK Column News [11 October] with Mark Anderson and Brian Gerrish, Mike Robinson brought up the topic of unaccompanied refugee children again: "Let`s move on to unaccompanied children because the saga continues. And Amber Rudd now getting in on this. Three hundred children in the Calais refugee camp . She wants to bring them into this county. That would be a good result she says. She says: `We have about 100 [unaccompanied children] in train who we hope to bring over in the next few weeks but on top of that I`ve made it clear that we will take children from the Dubs agreement`."

"So we`ll talk about that in one second. She said that of course the Calais refugee camp is about to be demolished. There are 387 children there. They have a legal right to come to the UK and she wants to bring them. ` If we ended up taking half the lesser number of ... 600, that would be a really good result`. So she`s aiming for 300. `We cannot imagine the UK with its traditions of human rights [yeah right] will refuse to admit unaccompanied minors into the UK. The main objective is to ensure that these minors have a better life in the UK where they find family and friends living in the country. And ... that was a comment from the French side anyway." 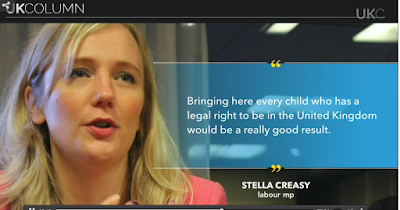 "So Ms Rudd being reinforced by the likes of Stella Creasy, Labour MP: `Bringing here every child who has a legal right to be in the United Kingdom would be a really good result`."

"Let`s keep the focus on Tim Farron: Of course he didn`t really say what Ive got up on screen. But if he did something about it his Parliamentary colleagues - of all parties - would have nothing to play with ..."

"That really seems to be the attitude of everybody that I`m coming into contact with. They will not address this issue of what happens to these children when they come into this country. I`m not saying children don`t need help. They absolutely do need help. They end up in the care system in this country and we`ve already seen that several hundred of them have disappeared out of the care system in this country. Disappeared to where?  Nobody really knows. The assumption is that they`ve been trafficked; that they`re ending up in some form of sexual slavery."

"That was a suggestion from Mr Farron himself Mike," says Brian Gerrish. "That`s not just us guessing. That was Mr Farron saying that he`s no doubt that a proportion of them have ended up trafficked and abused." 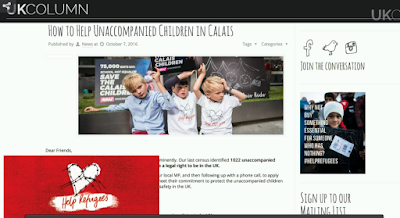 "It`s not just MPs of course. This is Help Refugees charity, set up by some celebrities I believe. They are calling for unaccompanied children to be brought to the UK. They say: `Today we`re asking you to take action by writing to your local MP and then following up with a phone call to apply pressure to encourage the government to act quickly to meet their commitment to protect the unaccompanied children who are currently living in the Calais camp that have a legal right to safety in the UK`. "

"They have a legal right to safety in the UK but there is no safety guaranteed in the UK and that`s our point."

"Then this organisation asks why do these kids have a legal right to be in the UK? They`re talking about Dublin III which entitles them to be reunited with nuclear family members living in the UK and they`re also talking about the Alf Dubs' amendment. The Dubs amendment which was passed in May 2016 is supposed to bring an unspecified number of the most vulnerable unaccompanied children in Europe to safety in the UK much like the Kindertransport  during the second world war."

"Again, they come to the UK; they are not safe. So I wrote to this organisation this morning and asked them for comment on this campaign that they`re running. I asked them pretty much the same questions that I asked Tim Farron. Now it took us nine months if you remember to get a comment out of Tim Farron about this and when he gave us the comment he did not explain how these children would be protected once they came into this country. This organisation hasn`t responded and I don`t think they`re going to."

Addressing the audience Mike Robinson says: "So perhaps you might like to write to them. We need to keep the pressure on Tim Farron. We now need to put some pressure on Amber Rudd and perhaps one or two of the other MPs that are calling for this. Not to say that these children should not be given help; they absolutely should be given help, but simply to ask the question what are these MPs; what is this charity; what are they personally going to do to make sure that when children end up in the care system in this country, that they`re protected within the care system? They`re not abused within the care system when we`ve got such evidence for historical abuse within the care system; that they won`t disappear back out the other side of the care system into some kind of trafficking infrastructure that we have no idea where they end up or what`s happening to them. These people who are calling for these children to be coming to this country need to answer those questions."

Brian Gerrish addresses Mark Anderson from American Free Press: "Mark, obviously this is a very UK focused subject with respect to Syrian children and also children in Calais. What`s your picture on it?  How do you see it from America there? Obviously there`s been these tales of similar problems in the states and some people argue that up to 300,000 children a year simply disappear in America."

"I don`t know those numbers exactly Brian. Certainly you guys are justified in being sceptical of these charities. There have been a number of cases where ... legitimate charities ranging from the Disabled Veterans who don`t really help disabled veterans to all sorts of other charities that have used these sorts of crises simply to raise money and pad their coffers. And that`s just the first level of wrongdoing. And if child trafficking is involved, and it very well could be, then really we have to get to the basis of this; and that of course comes back to NATO and the US and the UK and this permanent war footing and this constant sabre rattling towards Russia and all the conflicts going on; turning a blind eye to Saudi Arabia killing children there in Yemen; and the whole war machine that is creating the whole refugee problem and all these dislocated children and all these orphans . These things are an outcome of Western foreign policy. and if these MPs would get that in their head and they would see that connection then we wouldn`t have to have so many charities, many of which could be fraudulent or abusive. We wouldn`t need them in the first place because these children wouldn`t be driven out of their own land. And I think that that`s the fundamental point that we always have to keep in mind and keep drilling into the minds of US and British legislatures. That`s the key."

http://www.ukcolumn.org/ukcolumn-news/uk-column-news-brexit-fraud-threatening-russia-market-children-11th-october-2016
Posted by Alice Moore at 12:45