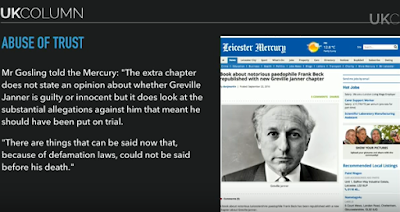 "Yes, this is an interesting piece. We have the noble Lord Janner who has been stated by the police as having a case against him, a case he obviously never faced in court which was absolutely compelling: enormous amounts of evidence and witnesses coming forward to explain how he abused them as children. So he used his influence, his power, his political connections, his connections with children`s homes etc etc to carry out attacks and prey on the vulnerable; and, as you cannot libel the dead, the Leicester Mercury here is reporting that this is going to be put into print... an extra chapter on Mr Janner is being added in and that will record in writing ... an outline of his crimes and what the victims stated that he did."

"So the book is called Abuse of Trust and the author is saying here that the extra chapter does not state an opinion about whether Greville Janner is guilty or innocent but it does look at the substantial allegations against him that meant he should have been put on trial..."

"So I suppose we should suggest that people have a look at that."

"Well we should," says Brian Gerrish. "But we could also add Mike that we are fully aware that a pamphlet was produced when Greville Janner was still alive accusing him of the abuse of - certainly young teenagers - and originally that pamphlet was attributed to the Labour Party Research Group. However, we now know that they didn`t actually produce the document. It was produced by unknown persons. But it was a very detailed and well written informative pamphlet that was originally circulated with a £2 price tag on it. Now we have a copy of that document and I would imagine that this would also be of great interest now because what is the book about? It is about victims coming forward and openly stating that they were abused by Grenville Janner. So the information is there. It will be interesting to see what, if anything, takes place."

Mike Robinson moves the conversation forward: "But in the meantime the abuse inquiry in London is falling apart." 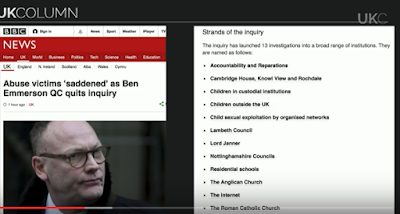 "Falling apart Michael?  Being taken apart. BBC say: Abuse victims `saddened` as Ben Emmerson QC quits inquiry. So we`ve got this QC standing down. I`ve put up the BBC`s analysis of the strands of the inquiry: thirteen, that magic number they often use, and so quite a wide spread. Of course, none of these allegation, none of these areas are true according to the BBC because there is no child abuse really; but all of these ... listed. But I noticed that as an institution the BBC isn`t one of them listed, Mike. Maybe that`s a bit of an oversight." 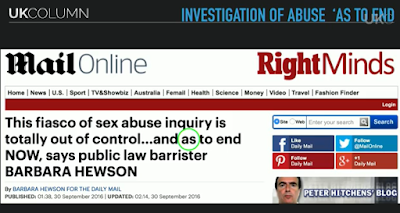 "But this is onto the meat of it with the Mail here. This fiasco of sex abuse inquiry is totally out of control..and as to end NOW, says public law barrister BARBARA HEWSON. Well I would have thought her English was a little bit better than that but I think it`s a Daily Mail typo." 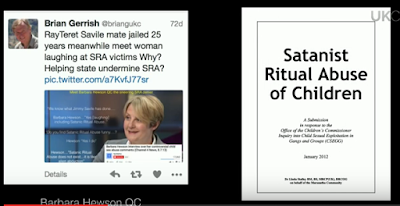 "So let`s remind ourselves of what this lady has been up to. Well she`s been on BBC and in wider mainstream media basically laughing at any abuse victims who say they were abused in a ritualistic environment. We contrasted this at the time with a document about satanic ritual abuse which was suddenly released by the Children`s Commissioner. We`re not sure why. This was January 2012 but it was very interesting that if this doesn`t exist there are many people who are prepared to publish reports on it."

"So this is a bit more: Cameron could also crack down on spurious allegations of historic sexual abuse - a veritable abuse industry. So this woman, very arrogant, very cold, sneering at children, teenagers, adults who come forward to say they`ve been abused and she thinks most of it is hype and most of the people are chasing money."

"But ... Huffington Post here: Barrister Barbara Hewson Stands By Age Of Consent Article and here she is criticising the Yewtree investigations. .. She wasn`t going to support that at all. So if we summarise: ... she was arguing for the age of consent to be lowered to thirteen. That of course nicely drifts it down - `Well the law says thirteen but they were only eleven` or `Well it was just a natural mistake to make.` So that`s how you normalise paedophilia in my view. She said clearly on BBC that satanic ritual abuse doesn`t exist; it`s like alien abduction. Notice the smirk on her face in this still. Of course at the time she did actually laugh. She asked it it`s helpful or kind to encourage people in mature middle age to recall unpleasant or brutal experiences from their childhood?  This is the inversion of logic. Let`s forget about it." 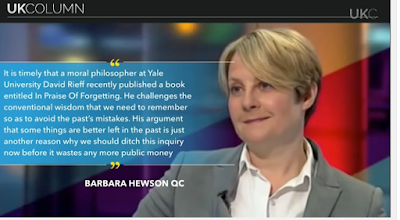 "And this one got me very interested: ` It is timely that a moral philosopher at Yale University David Rieff recently published a book entitled In Praise Of Forgetting. He challenges the conventional wisdom that we need to remember so as to avoid the past`s mistakes. His argument that some things are better left in the past is just another reason why we should ditch this inquiry now before it wastes any more public money`."

"So we had a look at the man in question:" [David Rieff]

"And it`s very interesting Mike. He`s a George Soros, `Open Society` man. He`s also linked in with the World Policy Institute. So these are people who say they are the right people to decide how the world should govern itself. We need a new world order. Clearly stated. And I get the impression that these are the sorts of people who would like anything goes where sexual relations are concerned. And that includes children."

Note: David Rieff is not discussing individual memory in his work In Praise of Forgetting: Historical Memories and its Ironies. He is dealing with historical or collective memory; so Hewson has actually misrepresented his work.


Ten years of child abuse
Posted by Alice Moore at 10:26