Common Law activist has been arrested 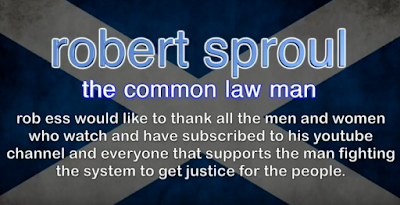 "The following video contains real footage of a confrontation between Robert and a man acting in the role of sheriff within an administrative hearing in a public building. In this hearing, Robert challenges the authority of the sheriffs who had unlawfully put the son and daughter of Robert’s sister into care previously based on false allegations and fraud."

"Despite no crime in law having taken place, no consent being given to any legislation whatsoever and not a single point of Robert’s argument being rebutted, the man acting in the role of sheriff ignored the law of the land and made a ruling under a legislative rule. In doing so, the sheriff perverted the course of justice in favour of the corporate agenda."

"Peoples` sons and daughters are being unlawfully stolen and put into care across the country on a daily basis. It is important that this video is made viral so that people can see for themselves the crimes that are occurring against the people."

"Robert was arrested for exposing corruption in social work and family courts and police wrongfully arrested him in the middle of the night. Police also stole his computer, his mobile and paperwork from his home, and cars - illegal search and arrest - warrant not signed - THIS IS POLICE STATE SCOTLAND where if you stand up to corruption of all political parties YOU GET ARRESTED - WHY THEY TOOK CONTROL OF POLICE."


It is expected that he will appear at the Sheriff Court, Paisley, Monday 4 September 2017.
Posted by Alice Moore at 13:17