It was announced on UK Column News yesterday that Brian Gerrish and Mike Robinson will be joining David Scott at a meeting in the Riverside, Stirling Road, Dunblane on Wednesday 28th September. 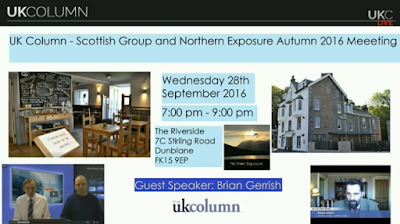 One of the topics covered in the news is the announcement by George Soros that he will be spending 500 million dollars to provide aid for migrants. Theresa May has also stated that the UK is going to be spending hundreds of millions of pounds on the migrant crisis in Europe. "So they`ve created the problem," says Mike Robinson. "They`re trying to incite the reaction in the public and they`re going to provide a global solution to this problem they`ve created... They`re herding people across the planet."

Pointing to an Open Democracy article Robinson goes on to say: "They`re pushing the idea that we should be `responsibility sharing`...on an equal basis because we want to distribute these migrants as far and as wide as we possibly can.  About the same number going to each host country."

Coincidentally, Tony Blair has stated that he is going to close his commercial operations because he wants to concentrate the vast bulk of his time on the not-for-profit work he does. ... "This is NGO, charity work. This is what`s driving the real evil around the world at the moment."

Brian Gerrish adds: "I think it`s significant that Soros has put his head so far above the parapet. These people like using their organisations... to do the job. If Soros is having to come public and say: five hundred million dollars to achieve this - if he`s going to have to do that in person - it says to me there`s a rush." 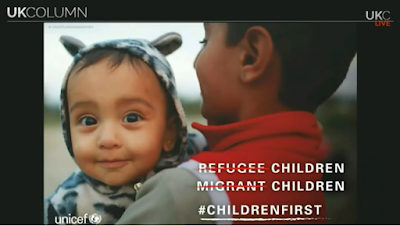 Mike Robinson reminds viewers about the previous day`s news when he showed a picture tweeted by Unicef: "At the heart of this programme are children... See the image put on a tweet .. .They`re trying to say with a hashtag that children should come first. And I was really highlighting the irony of Roelie Post because she`s still being targeted by the United Nations and the European Union over her attempts to expose what`s been happening to children over decades." 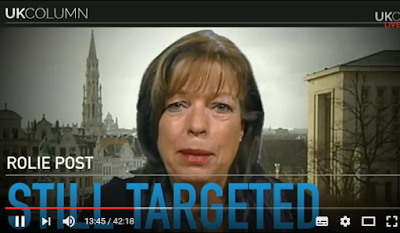 "Well, she passed this through to us via Vanessa Beeley today. The European Commission has announced a ... partnership shall we say, with Unicef, and they`re saying they`re helping to address learning and protection needs of children affected by the Syria crises. `As a new school year gets underway`, they say, `across the middle east a major injection of funds from the European Union is boosting efforts to provide learning opportunities and protection to hundreds of thousands of children and youth who have fled the Syria conflict`."

"So this is great !" exclaims Robinson sarcastically. "Lots and lots of money going in to protect children but we should not forget, only a few months ago, I think in April this year, this report from Gatestone Institute that the European Union and Turkey have treated Syrian refugees so terribly that they found themselves in such a horrendous situation that they have just become prey for sex traffickers."

Children are being sold for 700 dollars to 1700 dollars. " Parents are being persuaded that their children are going to better lives but, in fact, quoting from the report: `This has become the fastest growing ... criminal market in Europe with refugee smuggling the major source of income."

"So what`s the EU doing, according to that partnership with Unicef? They`re putting money into keeping refugees in camps which of course places them in a position of being easy targets for these traffickers."

Gerrish agrees: "Yeah. So we force the migration problem. With that we get families broken up: the men in particular often the first to leave in order to try and get work elsewhere and that leaves mother and the children vulnerable to what`s then going to come."