Globalism at the local level

In recent times Mike Robinson has been talking a lot about constitutional change on UK Column News:

"Here`s another example: The Global Parliament of Mayors held their inaugural meeting... and they had a two day conference which concluded as I say on Sunday. The new platform they say will enable cities to further their cooperation in addressing global challenges. So in this inaugural meeting mayors discussed action oriented plans concerning climate change, migration and governance and here`s an example."

"One of their plenary sessions: The City & the Interdependent World, and of course this is the key point that we`re trying to make with regard to the constitutional change and also governance changes that are going on globally at the moment. Because the relationship is being changed not just in the United Kingdom between... the individual and the nation. And interdependence is a very key part of this." 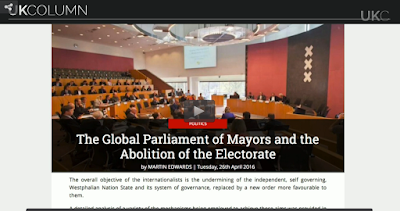 "So I want to draw people`s attention to the article on the UK Column website once again: The Global Parliament of Mayors & the Abolition of the Electorate. And if you haven`t read that, please do read it. What they are arguing for is a planet ruled by cities which represents a new paradigm of global governance: Of democratic - glocalism as they`re calling it - rather than top down imposition, of horizontalism rather than hierarchy, of pragmatic interdependence rather than outworn ideologies of national independence. So national independence is an outworn ideology Brian."

"Foundations for this new world are being erected in our own age as cities collaborate, and citizens communicate across borders with increasing ease and frequency. What remains is... liberating possibilities of these developments and in a question and answer session the Global Parliament of Mayors were asked: `In a world of nation states and supranational entities like the EU will cities have the resources and jurisdictional authority to undertake the difficult work of global governance?` And the answer was: `One of the most important aims of the Global Parliament of Mayors is to develop a right of the city platform to secure the resources and jurisdictional autonomy necessary to discharge local and global responsibilities.` And they were then asked: `Can the Global Parliament of Mayors really be a world government with a command and control architecture?` And the answer was: `No it cannot. It should not aspire to be that. It should be a bottom up, soft governance institution that works through influencing other levels of governance and the civic and private sector with sound policies and effective solutions. Global public opinion must also be its target`."

"So the key point here is that this is Big Society on a global basis. This is about what appears to be local control. We were talking about this yesterday that it is in fact centralised control at the local level. It`s also participatory democracy in the sense that individuals do not get the opportunity to participate. Bodies like Global Parliament of Mayors, like third sector organisations [charities] - they get the opportunity to set policy, to advise on policy and to make their opinions known.  But the individual doesn`t."

"And just to end this section: I`ll just highlight this quote from the Mayor of the Hague who of course is one of the people who is instrumental in setting up the Global Parliament of Mayors, and he said:"

"The Global Parliament of Mayors will deploy collective urban political power manifesting the right of cities to govern themselves, as well as the responsibility to enact viable, cross-border solutions to global challenges. In this era of interdependence, where nation states are increasingly dysfunctional and cities are everywhere rising, the moment has come for cities to take the leap from effective local governance to true global governance."

"And this is what we`re looking at."

Brian Gerrish summarises the situation: "It is Big Society by stealth and of course there was information straight out of the Conservative party and Labour saying that they were following the Saul Alinski policy in creating communitarianism. So this is what we have started to see coming through."

====================================
I think we can see how participatory democracy is working in joined up Scotland with the recent announcement of an intensive consultation about the Named Person policy. The big charities and other selected stakeholders will have their say, but the ordinary people who oppose the policy will not. The result is a foregone conclusion.

I`ll just add this:
Education for the 21st century

"Curriculum for Excellence is now a reality in all Scottish schools and the message of `think global, act local’ encapsulates a great deal of what the new curriculum means in practice..."

"It is vital to remember that global citizenship is not an add-on to Curriculum for Excellence - it is central to it..."

It`s getting easier to see that education for the 21st century actually means preparing children for the new world order.
Posted by Alice Moore at 18:54