Progressive politics, or a step back into the dark ages ? 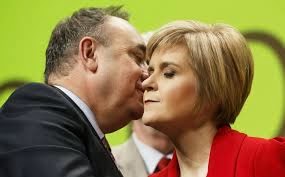 "Scotland`s First Minister Nicola Sturgeon has joined Scotland's outgoing top judge in a bid to block increased judicial accountability & transparency with the creation of a register of interests for judges."


"The proposals – under investigation by MSPs since January 2013 - call for the creation of a single independently regulated register of interests containing information on judges backgrounds, their personal wealth, undeclared earnings, business & family connections inside & outside of the legal profession, offshore investments, hospitality, details on recusals and other information routinely lodged in registers of interest across all walks of public life in the UK and around the world. "


"The petition has cross party support from msps who backed a motion urging the Scottish Government to create a register of judicial interests at Holyrood on 9 October 2014 - reported along with video footage and the official record, here: Debating the Judges. "


"The latest, surprise intervention by the First Minister in the bid to bring transparency to Scotland’s secretive judges only came to light last week - although Ms Sturgeon’s letter is dated 30 March..."


"The First Minister’s letter is an almost word for word quote from previous letters written by Lord Gill who has previously blasted msps on the Petitions Committee for even to dare to consider the issue of increased transparency of the judiciary."


http://petercherbi.blogspot.co.uk/2015/05/interests-intervene-first-minister.html
The struggle for transparency in the Scottish judicial system has a sullied history as the Scottish law blog has documented.

Using taxpayers money, (Dame) Elish Angionlini who was Lord Advocate for Scotland, brought a private prosecution against Robert Green for harassment. He had had the audacity to write to the Crown Office pleading that they should instruct Grampian Police to:

"...investigate serious and substantiated allegations of the paedophile abuse of a young downs syndrome victim, Hollie Greig. In particular Mr. Green asked that Grampian Police should be instructed to interview those named as Hollie’s abusers." (including a serving police officer, and a local Sheriff).

She would accept no criticism for failing to act. At one particular hearing Robert Green was in front of a Sheriff who did not declare his ten year working relationship with Elish Angiolini and who refused to recuse himself.

Given this level of corruption, it is no surprise that Robert Green was imprisoned twice for what should have been petty offences, even if they had been proved.

While the Children and Young People (Scotland) Act 2014  allows Named Persons to gather the personal information of every child and their family in Scotland, the First Minister works against the petition for a more accountable and transparent judiciary - an essential in any true democracy.

‘Power corrupts’ is a well-known truism but there is no acknowledgment of the possible danger of increasing State power over families. There is no recognition of the fact that liberal societies have placed a high value on privacy and confidentiality precisely because they present an obstacle to the State. While the State sees this in a negative light, the individual values it as a protection of their freedom. The professional ethic of confidentiality is seen by the government as an obstructive barrier to be removed in implementing their monitoring and assessment programme but this should remind us that the ethical principle is playing its rightful part as a protective barrier, defending the individual against excessive intrusion by the State.