No lessons for climate change activist

"Teenage climate change activist Greta Thunberg will take a year out of school and travel to the US to continue her campaign to promote environmental protection."

"The teen kicked off the hugely popular ‘school strike’ movement last year for kids to push their elders into taking a serious stand to tackle the devastating effects of climate change and safeguard their future..."

"As part of her commitment to the cause of reducing carbon emissions, Thunberg does not travel by plane. Accepting an invite to the UN’s special climate change meeting in New York in September means a lengthy transatlantic voyage ahead, so she’s decided to take a sabbatical year to make the journey."

But the percentage of various greenhouse gases in the atmosphere is not the only fact that has been misunderstood by Greta.

Here is UK Column`s Mike Robinson, along with Patrick Henningsen from 21st Century Wire, who recount Greta`s good news towards the end of the programme:

"I just wanted to end on a positive note," says Robinson, "Because really `good news,` Patrick: Greta Thunberg, the teen climate change campaigner ... is taking a year off from school so she can go to the United States and, in fact, America in general to promote her policies to deal with climate change."

Patrick Henningsen: "Sacrificing her own education for the sake of the climate ..." 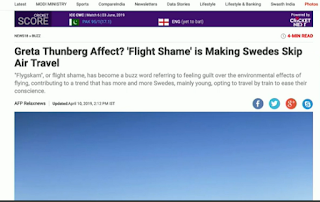 "So you`ll be glad to know, of course, she runs this campaign about Flight Shame.  So, apparently, she is not going to fly to the Americas and the United States. She`s going to take a boat which is really a bit unfortunate because this organisation ... reported to the Guardian in 2016 that if you`re on a plane, aircraft use 0.257 kg of CO2 per passenger mile. But unfortunately ships use 0.43 kg of CO2 per passenger mile. So this is a little unfortunate for poor dear old Greta. She clearly hasn`t considered this..."


Patrick Heningsen: "Well maybe it`s better, Mike, that young Greta takes the plane instead of the ship. And if she does that then she won`t need to take the year off school because she`ll be spending less time travelling by boat..."
https://www.youtube.com/watch?v=QJLflt6FuhA