Lady Smith and the altered transcript

"Well let`s move on to Robert Green. And of course Robert Green was the man who stayed with the Hollie Greig abuse case where Hollie had been abused and clearly there was no justice coming forward. It took Robert Green to stick with the case to report the facts and ultimately to go to prison for his efforts in trying to protect children from child abuse. This has now reached an interesting stage because although many people probably think everything around Robert has died down, Robert has been campaigning for justice for himself as to what was and was not said in court." 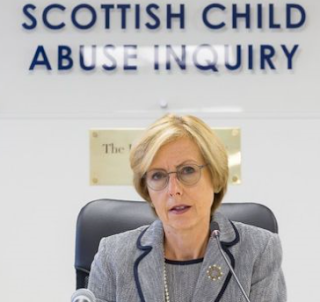 "And we`ll just pop her up on screen. Briefly, Judge Lady Smith is now north of the border supposedly running the Scottish inquiry into child abuse. What`s the link between this lady and Robert Green ?"

David Scott: "This is very interesting. Lady Smith picked up the reins of the Scottish independent child abuse inquiry... after everyone else led by the chief Susan O`Brien QC resigned, citing government interference and lack of independence. So lady Smith is now the sole director of this inquiry. She replaced the three people formally running it and is there personally directing how it proceeds. Lady Smith is the person who was asked to review Robert`s complaint that the Judge in this case, Sheriff Principal Edward Farquhar Bowen, had made racist comments during the sentencing...[hearing in 2012] These comments were entirely omitted from the transcript provided to Robert of the sentencing and comments. That transcript came from the Crown Office and Procurator Fiscal Service... She wouldn`t let Robert listen to the tape but she listened to the tape of the hearing and she assured Robert that there was nothing to be concerned about. It transpires that`s not true."

Brian Gerrish: "Right, so we can show a little bit of the documents here to show people how this trail works. 1`ve got to say up front that of course, at the moment, what was said and what wasn`t said in court is not in front of us as evidence, so what the sheriff did and didn`t say we are trying to track down... The important thing about this is how the system itself seems to be manoeuvring and obfuscating around the information."

"So the first document... is from the Crown Office in Scotland... Tell us about this document."

David Scott: "So this was given to Robert Green on his release from prison. He was complaining that the Sheriff had made racist comments during the sentencing and hearing, and that this showed bias, this being grounds for appeal. [The] document [is] on Crown Office notepaper and it`s as you see quite brief. We`ve actually covered this in detail in the Column many years ago because it`s quite strange as well. But even stranger is that we`ve now, after some considerable negotiation and exchange, found that the original tape is still held. It`s in the archives of the Scottish Courts and Tribunals Service and after some discussion they agreed to provide initially a written transcript, a new written transcript, of the same comments. So when we see the new written transcript ... we find that it doesn`t match. "

Brian Gerrish: "[The] Scottish Courts and Tribunals Service has now come into it. Have I got the right one?"

David Scott: "That`s correct, yes. Now it doesn`t match. Now indeed it doesn`t match very closely at all. It`s sort of like the first one was a sort of paraphrase. The second one has clearly been transcribed directly from some sort of record, we don`t know exactly what, and lo and behold there`s an additional sentence in the new transcript that was entirely omitted from the original document - and what Robert has been saying for six years."

Brian Gerrish: "So we can bring this new sentence on screen. And what we`re saying here is that this has never been seen before. Suddenly, we`ve got this sentence which has now appeared in a second version of what is claimed to be the transcript."

David Scott: "It`s a very interesting sentence. So this was omitted from the accurate record that was provided by the Crown Office and was confirmed by Lady Smith. And the sentence says: `Let me tell you that we in Scotland are more than capable of identifying our own deficiencies without the assistance of someone with your background`. Now this is interesting on many levels. Not only was it omitted entirely from the initial record but it covers exactly the ground, or subject area, that Robert Green and the six or seven other witnesses in court that day all said was covered by the sentencing comment. It just does it in a way which is neutered. It calms it down; it reads like what the Sheriff maybe wishes he said. It doesn`t comply, tally closely, with what has been reported to me by numerous witnesses ... But it covers the same ground."

Brian Gerrish: "To emphasise this we`re going to show - we`ll bring it up on screen - what members of the public who were present at the hearing allege that the Sheriff said to Robert Green: `You are either stupid or misguided, probably both, to think that you, a Welsh-English man, can come up to Scotland to tell us how to run our justice system. I am telling you that WE run the justice system just fine.` So that`s what members of the public who were present allege was said."

"I`ll just jump back and show again what is now being said the transcript shows. `Let me tell you that we in Scotland are more than capable of identifying our own deficiencies without the assistance of someone with your background`... I was told shortly before we came on live for today`s news that in England it is normal procedure that although somebody is actually there taking down the transcript as the trial takes place, that transcript goes ultimately to the Judge to be - what`s the word - verified."

Brian Gerrish. "Sanitised ! Before it is released to the public as the true version of events. I don`t know whether the same system works in Scotland but, of course, if it does this makes life very interesting indeed."

David Scott: "Well it`s an excellent question because we`ve been told by the Scottish Courts & Tribunals Service that this transcript is verbatim, taken from the tape that was recorded in court. Now they`ve offered Robert the chance to listen to the tape. So far they`re refusing to give him a copy of the recording for forensic examination but they have offered to allow him to listen to it. So that`s going to happen..."

Brian Gerish: "OK, now you have written some letters on this subject. You thought that this one that you wrote some time ago to Lord Gill was of particular importance because you were coming back to the significance, the legal significance, of this event. We still don`t know what the true facts are but this is giving a flavour for it by having a look at the dangers of bias in court cases and you found this very powerful case precedent."

"Back in the 1980s, a Sheriff whilst relaxing at Ayr curling club, pronounced that the coal miners, then on strike, would not receive legal aid if they came into this court on breach of the peace charges. Some of the miners later appealed his decision, on quite different grounds, to refuse legal aid. The matter went to the Court of Session. The Lord Justice Clerk, Lord Ross, concluded that the Sheriff had not brought his prejudice into the court and that his decisions had been correct in law but that this was not enough. `There must not be even the appearance of bias,` Lord Ross said. `There is nothing to suggest that at the trials the Sheriff acted unfairly. What the Sheriff failed to note was that the interests of justice required not merely that he should not display bias but that the circumstances should not be such as to create in the mind of a reasonable man the suspicion of the Sheriff`s partiality.` Lord Ross found for one of those appealing."

"The inescapable conclusion is that the statements by Sheriff Principal Bowen concerning Mr Green`s nationality failed to live up to the standard required by Scots Law and defined in the statement by Lord Ross. The logical implication is therefore that the court records were altered not for public relations reasons, or to save the Sheriff the embarrassment of an unguarded remark, but to avoid Mr Green having grounds for appeal; an appeal Mr Green could well have won given the previous stand made by the Court of Session on this subject."

David Scott: "Yes, this is a 2014 letter from me to the head of the judiciary in Scotland, the Lord President of the Court of Session. I write here pointing out that - now as I`ve said we`ve got six or seven separate witnesses, all of them reasonable men and women, who came away from that court convinced there were grounds to doubt the Sheriff`s impartiality. These people are on the record... Their records incidentally were offered to Lady Smith who refused to receive them."

Brian Gerrish: "OK we`ve got a slide here, effectively your summary of this, which I can read out...." 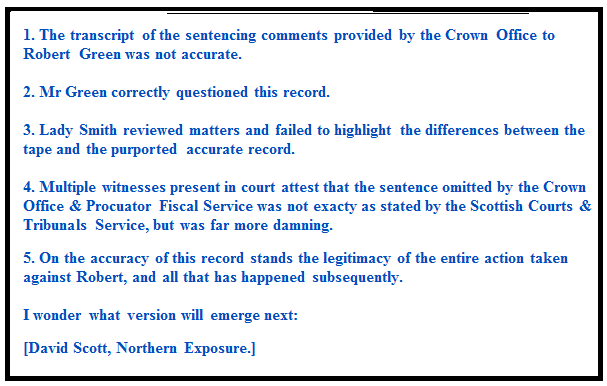 Brian Gerrish: "Really David, you are saying that if the public are not entitled to know what really took place in the court hearing and who said what, there is no justice north of the border and there is certainly no justice for Robert Green."

David Scott: "It must been seen to be done; it must be ... as the quote there from Lord Ross made absolutely clear; there must be not even a hint or suggestion in the mind of a reasonable observer the system is less than scrupulously fair. It seems that in Robert`s case we`re failing that by a country mile."