Mike Robinson: "Now yesterday we mentioned Sajid Javid making it his personal mission to deal with child sexual exploitation online; and I suggested that, perhaps, there was a bit more to this than meets the eye; because let`s face it, the British government for many many years of many political hues hasn`t exactly felt that this was a subject that they particularly needed to deal with." 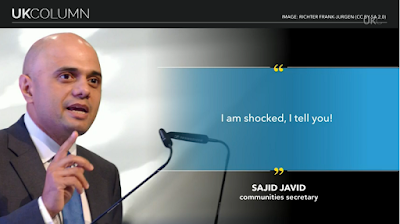 "So they`re going to keep children safe online and as we made the point yesterday Sajid Javid said that he was absolutely shocked...at the scale of the potential for abuse of children online; and so he had said that all technology companies had to step up their efforts to tackle online sexual exploitation; and that was the result of this figure of 80,000 people in the UK presenting some kind of sexual threat to children online; and a 700% increase in child images being referred to the National Crime Agency."

"But he said that while he was pleased at the efforts of online platforms to tackle online extremism following the government`s calls for them to do that a couple of years ago.... really they needed to do something about this issue as well. Well, as I say, you know, this seemed very fishy to me because government has done absolutely nothing in this area in the past. But we don`t need to worry because ... at the same time Sajid Javid is making this statement and saying that the social media companies and the big online companies needed to do something about this, well, Google just had a press release ready to go - just a pure coincidence Brian. It wasn`t staged in any shape or form; they just had it ready to go, this announcement, which took place about the same time Savid Javid was making his."

"And they`re saying that they are going to use AI to help organisations detect and report child sexual abuse material online. So this is a new free tool that they`re offering to service providers, NGOs and other technology companies which is going to be able to review content at scale and use deep neural networks for image processing. They can now assist reviewers sorting through many images by prioritising those that are the most likely to contain child sexual abuse material... So that`s good."

"So Javid had said that he wanted technology companies to stop child grooming taking place on their platforms. He said he wanted them to work with government and law enforcement to shut down live-streaming child abuse. He wanted companies to be much more forward leaning to help law enforcement agencies to deal with these types of crimes; and he said that he wanted them to show a greater level of openness and transparency and a willingness to share best practice and technology between companies. So if you were taking this problem seriously those suggestions are probably quite useful; but I maintain a healthy scepticism."

"Now the other item that he mentioned on his list was this: that he expected ... technology companies to block child sexual abuse material as soon as companies detect it being uploaded. And this one stuck out for me because ... this is identical  to the EU`s copy directive." 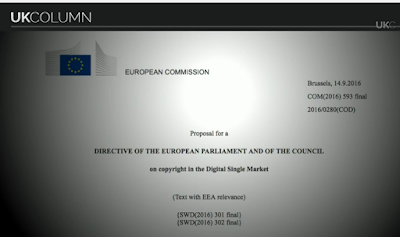 "Article 11 of that failed to pass in July which was all about the ability for technology companies to scan content as it`s being uploaded to their platforms and automatically censor content that they didn`t feel was appropriate. Now, of course, I am by no means suggesting that child sexual abuse material is appropriate to upload but of course this is ... about implementing, or finding an excuse to implement, certain types of technologies. I just reiterate the point that at no point in the last 30 years has the British government done anything to deal with this issue and suddenly now we`re dealing with it by implementing policies and implementing technologies which aren`t going to make a huge amount of difference to the people who are perpetrating these crimes but are going to make a huge amount of difference to us; because what this means is that all material being uploaded to these platforms is being scanned... under the cover of being scanned for the purposes of identifying this material."

"What else is going on today?"

"Well Cressida Dick the police commissioner for the Metropolitan Police said: `Vital evidence in criminal investigations held by tech and social media firms should be made available in minutes.`" 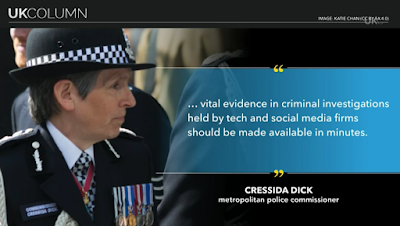 "So, in other words, what we`re building here - under the - this is a pretty cynical effort I think by Sajid Javid - to build a police state using child abuse ..."

Brian Gerrish: "As a way of levering in the censorship."

Mike Robinson: "Absolutely. And I`ll just say once again the British government has done nothing on this issue, and you know, I have to say I`m staggered that the various police authorities are able to offer any statistics on this:  Suddenly we`ve got this big statistic of 80,000 people and a 700% increase; because one thing we`ve been flagging up over the last number of years is how statistics with respect to child abuse and children in care and so on, these statistics are impossible to find because they`re not held...So how they magicked these up for this purpose is another question I`d like an answer to."

Brian Gerrish. "Very interesting. Well if we might pop the lovely Cressida Dick back on the screen there Mike I read this. It makes me wince: ...`Vital evidence in criminal investigations held by tech and social media firms should be made available in minutes`. "

"For what? Because, Ms Dick, when one of your own policemen, John Wedger, came forward with his evidence ... that the abuse of children...children dying, was being covered up by the Met police, by MPs, by local authorities and charities, your force did absolutely nothing with that evidence. In fact, they attacked John Wedger: bullied him, threatened him, put him on half pay, stopped his pay. So this was all on the watch of Cressida Dick and yet she`s now standing up to threaten internet companies that you better produce this information. Presumably she wants the information to help close it down, as was done with John Wedger. "

https://www.youtube.com/watch?v=siUBHz7d2ps
Posted by Alice Moore at 15:18