"The parents of Madeleine McCann have lost their libel appeal over ex – police chief Goncalo Amaral’s book which claimed they covered up their daughter’s death. The judgement came from Portugal’s highest court."

"Officially no public decision will be made until later on in the week, but a source according to the Daily Mail newspaper has said the decision did not go the way of the McCanns."

"The decision is final in Portugal but the McCann’s can take the fight to the European Court of Human Rights if they want to overturn the decision."

The McCanns have threatened to sue anybody who publishes the book `The truth of the lie` in the UK. 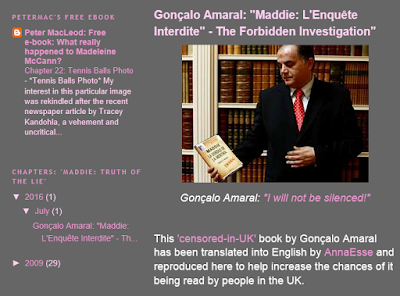 An English translation is available online. It is a well measured and professional piece of work as you would expect from a man just doing his job whose account happens to agree with the official Portuguese version.