All in it together: The Family Test and joined up government

The Family Test was covered in the UK Column news today.

"The Family Test was introduced in 2014 in England. All new domestic laws and governmental policies must face the Family Test to make sure they support strong and stable families."

"The DWP has published departmental advice on carrying out the Family Test. The Family Test is not a statutory requirement and publishing the results is encouraged, but not required. Relatively few Family Test results have been published leading to criticism that the policy is not yet successfully embedded in all Governmental Departments."

Having introduced the topic Brian Gerrish goes on to say: "So at the moment this is sort of caught betwixt and between; it`s not been fully brought in; there`s a little bit of dissent but I think it`s very interesting to see what`s going on here because it`s still very much in the government`s mind..."

"So we know that David Cameron will manipulate the press, if he can, in order to get his objectives into power. But this is what he has said: `I said previously that I wanted to introduce a family test into government. Now that test is being formalised as part of the impact assessment for all domestic policies. Put simply that means every single domestic policy that government comes up with will be examined for its impact on the family.`" [August 2014]

"And this thing is growing in the background. Here`s the document that`s just been pushed out by the House of Commons publishing organisation:  Implementing the Family Test: A review of progress a year on and this bit I find very interesting because it says `In March 2016 Implementing the Family Test was published by The Family and Childcare Trust, Relate and Relationship Foundation supported by 14 other charities.` Now I think what we`ve got going on here Mike is what you`ve described as participatory democracy. So voters don`t get a say in what`s going on here but people who are working for charities, many of whom are directly funded by the government, they get a say in what`s happening."

"Yes," agrees Mike Robinson. "There`s a fundamental change in what defines government in this country... Charities are right at the centre of that and we`ve said it many times. With all this charity going on at the moment it`s a wonder there`s any problems in this country at all."

"Well this is the point we would want to make... Let`s see how it goes on. So the Department for Work and Pensions (DWP) published guidance on implementing the Family Test, and it consists of five questions."

2. What kind of impact will the policy have on families going through key transitions such as becoming parents, getting married, fostering or adopting, bereavement, redundancy, new caring responsibilities, or the onset of a long-term health condition?

3. What impacts will the policy have on all family members` ability to play a full role in family life, including with respect to parenting and other caring responsibilities?

4. How does the policy impact families before, during and after couple separation?

5. How does the policy impact those families most at risk of deterioration of relationship quality and breakdown?

"When you read those five bullet points Mike you can see the family coming under the government microscope. The government needs to know everything that`s going on in a family because they need to know that so they can know what impact they`re having."

"So if we bring David Cameron back on because, of course, he`s had quite a lot to say about this. This is one of his quotes: `So from here on` - and this statement was made post the riots in 2011 - `I want a family test applied to all domestic policy. If it hurts families, if it undermines commitment, if it tramples over the values that keeps people together or stops families from being together, then we shouldn`t do it`."

"And that`s not enough because we`ve got a bit more here. `More than that, we`ve got to get out there and make a positive difference to the way families work, the way people bring up their children and we`ve got to be less sensitive to the charge that this is about interfering or nannying`. "

"This is the real Conservative Party coming into view here. This is raw fascism in my opinion because he wants the state to be interfering in family life whether we want it or not... And we better finish it off because he did have a lot to say on this."

"We are working on ways to help improve parenting. Well now I want that work accelerated, expanded and implemented as quickly as possible. This has got to be right at the top of our priority list..."

Gerrish adds to that by saying that the real meaning is: "We must get government control of these families now..."

"And of course this has been a very strong agenda going on with the Conservative government and we`ve got the networks being built up: local authorities integrated with social services, childcare, the police, education, mental health, the state watching every aspect of our lives. This is unbelievably dangerous Mike."

"And they`re doing this under a veneer of protecting people`s families and looking after people and being warm and cuddly," says Mike. "There is nothing warm and cuddly about this...The other observation I would make about this is what this does is puts a whole new level on the decision in the Supreme Court to crush the Named Person scheme in Scotland because that clearly was a pilot for something that was intended to be rolled out much broader."

"Well of course we`ve got lots of clues that the Named Person scheme is sitting in the background ready for England and Wales and there will be more on that in due course. We`ve now got opposition to the Tory party disappearing as Labour is dismantled from within. What are we left with? We`re left with a Conservative dictatorship and I think we can see this being built very quickly... We can see where that`s going."

Further on in the news Gerrish explains the relationship between the Family Test and Big Society. "If people think Big Society has disappeared; it absolutely hasn`t. It is being put together step by step and what Big Society ultimately leads to is the fact that everything in the country is networked together. So you won`t even have a local children`s football team without the local authority more or less having a stake in the club so that they can keep an eye on the people running the club and what`s happening. And this goes all the way through the charity sectors and, of course, it goes a long way to explain how a very pernicious charity like Common Purpose can even exist because actually Common Purpose has  become part of the Conservative government regime:  all interlinked.
==============================


At this point I think it might be appropriate to introduce an article from Civil Society which discusses the Scottish experience to developing participative services. Note the word `participative` (i.e. participatory democracy) and the role of the voluntary sector across the UK. It would also be pertinent to notice how many ideas are linked to Common Purpose: such as leaders, Carnegie UK Trust, charities and  networks. The emphasis on evidence suggests a government intent on knowing everything there is to know about the public. Here it is:

"Pippa Coutts, from the Alliance for Useful Evidence, and Jenny Brotchie, from Carnegie UK Trust, argue that the Scottish experience to developing participative services highlights the key role for the community and voluntary sector across the UK as both creators and champions of evidence..."

"As the Carnegie UK Trust’s InterAction research highlights, charities are important knowledge creators. Many are already delivering participative, enabling public services. Most have a strong connection to the people and communities that they work with. And, as we know, charities are often willing and able to test out innovative ways of working and adapt quickly to changing needs. The challenge will be to bring together the knowledge of charities, academics and public sector partners to build and make accessible a strong associated evidence base..." 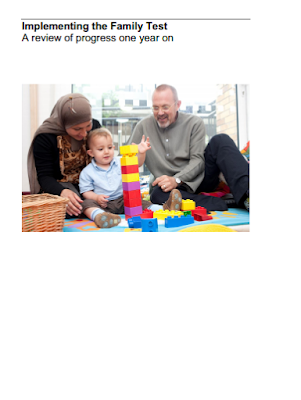