The isolation of some prisoners continues

The UK Column points to an article in GQ which draws attention to the use of isolation in the American penal system. Buried Alive: stories from inside solitary confinement.﻿ 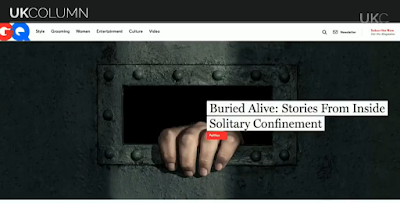 "It is brutal. It is torture by definition. It destroys the mind, body, and soul, making rehabilitation next to impossible. It is also outrageously expensive, and it doesn't work. Yet at the end of the Obama era, and the dawn of Trump's, isolation is as widely used as ever in the American penal system."


"They go through quotes from people who have been through this process." 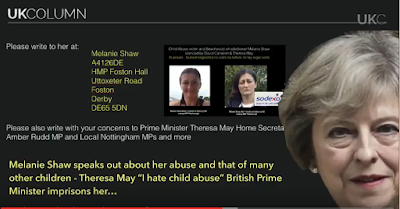 "I understand that Melanie Shaw is back in solitary confinement," says Mike Robinson which is the reason he brings up the topic.

"Yes she has been for several weeks now. We still cannot find out why she`s been put back into solitary confinement, except that we can tell you there`s been changes in the governing system, HM Prison Foston Hall.  So whereas Melanie had been saying that some of the senior staff had changed their style of interaction with her, it appears that`s now regressed; it`s got back to the usual bullying regime that she was experiencing before. So if we tot it up, Melanie Shaw must be close now to about eleven months in solitary confinement. And remember she`s an abuse victim herself; she suffers from post-traumatic stress and this is what British prime minister Theresa May does to abuse survivors. She puts them in solitary confinement which the UN - aside from this article - the UN has already said that solitary confinement is effectively torture."

"Well there can only be one reason and that is because along with ... other child abuse survivors Melanie Shaw is talking about the involvement of British MPs in the abuse of children. And of course at the moment it`s taking the very brave Chief Constable of Wiltshire ... who`s actually pushing through with investigations into Ted Heath and the abuse of children . But of course we can see the BBC`s own Youtube clip in which Tim Fortescue Chief Whip for Heath says clearly on camera that MPs who had been abusing little boys came to the whips which covered that up in order to control those Members of Parliament."

"So there`s not much of a secret."

https://www.youtube.com/watch?v=KOXYo91-lAA
Posted by Alice Moore at 14:17