Charities: the eyes and ears of the community 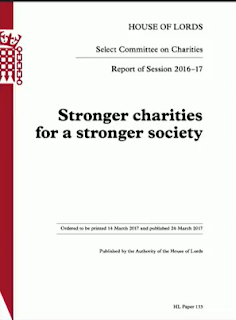 From UK Column News on Monday:

"Let`s move into this little area because if we want to know what the changes are for society, the government is now telling us very clearly. This was released in the last couple of days from the House of Lords: Stronger charities for a stronger society. I wonder what the comment of child abuse survivors would be to that statement in its raw form. Because many of those people say - well they laugh - if you mention the names of the charities NSPCC or Barnardo`s, but here we are, Stronger charities for a stronger society."

"It says: `We are living through a time of profound economic, social and technological change and the environment in which charities are working is altering dramatically. We do not believe that this is a temporary aberration: such disruptive changes are likely to become the norm`."

Brian Gerrish underlines the statement `such disruptive changes are likely to become the norm`.

"Well that`s very interesting. How do they know that Mike? And this is unlikely to be a temporary aberration: such disruptive changes are likely to become the norm."

Mike Robinson: "They can only know that because that is the intention."

"That is the intention and it`s ... only the UK Column that`s pointed out that people are talking about the need to have disruptors in society and we featured some time ago the Ted video ... with a man from Barnet Council - who talks about future government and the fact that we need more disruptors in order to get the necessary changes through."

"So here we`ve got the policy, the policy is of disruption in order to get the government`s change agenda through. What`s the change agenda? Well luckily this Baroness is going to tell us. So here we are: Baroness Pitkeathley and here are some of her comments in respect to the report."

"Charities are the eyes, ears and conscience of society says Lords Select Committee... we need `Stronger charities for a stronger society`..."

"Wouldn`t it be the case that if you have a strong society you wouldn`t need charities because you wouldn`t have people who are poor or suffering or ..."

"That`s absolutely true. Charities are the eyes and ears of society, Brian?"

"Did that remind you of anything?"

"Well are charities replacing GCHQ, is that what`s going on?"

"Well I think that`s part of it. But eyes, ears...certainly made my ears prick up because I remembered this." 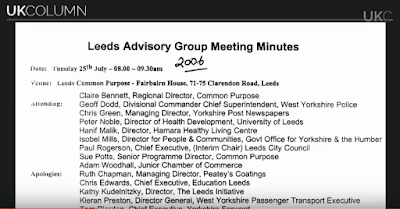 "This is Leeds Advisory Group for Common Purpose. This is the meeting going back to 25 July 2006. And just for an indication, here is a charity Common Purpose - we often say this is an oxymoron because of course they`re a political charity. Here are the sorts of people Common Purpose were bringing together. So we`ve got a Regional Director of Common Purpose. We`ve got a Divisional Chief Superintendent from West Yorkshire Police. We`ve got newspapers. We`ve got the university. We`ve got the Council. We`ve got businesses; we`ve got people from the Education sector all meeting behind closed doors under Chatham House rules of secrecy."

"So the two that really stick out are the policeman and the newspaper man because those two organisations should be kept separate from any of this nonsense."

"Indeed. So separation of powers gone out of the window, under the control of a political charity. Why were we so interested? Because in this particular meeting, well it was this statement:"

The group and new Advisory Group members were welcomed and introductions were made.

Claire went through the advisory briefing pack and reiterated that they are not a board, but the eyes and ears of Common Purpose, Leeds, and will feed key business information to the director. They are there to assist with recruitment, by spreading the word, putting their own staff on programmes and making decisions on accepting participants for matrix. The Advisory Group should also act as a support in localising the content of the curriculum for matrix.

"So think of those orders being given to the very senior policeman there. Because his job is not to be a policeman it`s to work for business information for Common Purpose. And what do we see here? An excellent look into very very dangerous activity by the charity Common Purpose but of course this is mirrored across many other charities as we see." 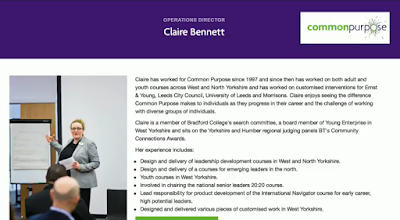 "Here`s the lady Claire Bennett. You can find her on the Common Purpose website and according to the information she`s very experienced."

"Design and delivery of leadership development courses in West and North Yorkshire."

"Design and delivery of courses for emerging leaders in the north... Youth courses. On it goes. So I don`t know where she got all this experience - she`s been working for Common Purpose for years but this is the lady who was simply pointing at a policeman - a senior policeman - and saying this is what you will do in order to support Common Purpose."

"So let`s come back to the Baroness and see what else she had to say:" 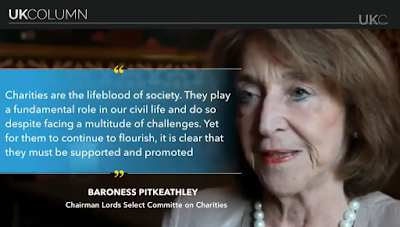 "She said: `Charities are the lifeblood of society. They play a fundamental role in our civil life and do so despite facing a multitude of challenges. Yet for them to continue to flourish, it is clear that they must be supported and promoted`."

"So what`s coming here? Well it`s pretty simple because if you`re a charity you`re not going to be allowed to act as a charity unless the government is supporting and monitoring you`."

"She says: `We found that charities lead the way with innovation, but that this is at risk of being stifled by the `contract culture`. And while advocacy is a sign of a healthy democracy, and is a central part of charities` role, this role has been threatened by Government`."

"Now this is itself an interesting statement. What she`s getting at is the fact that many big charities: Barnardo`s, NSPCC, for example, are now doing the work of government. So they are running contracts. They are no longer effectively charities in the sense that most of us would remember. So big contracts she says are causing charities problems."

"So running on through: `We hope that charities will be encouraged by this report; that the Government will respect their role; and that in addition it will value the connections charities have with all sections of society, and encourage the vital scrutiny they provide`."

"So what we`re interested in here Mike is the fact that the charity sector - that`s about 167,000 charities in UK representing well over £44 billion - those charities affect everyone. They affect local communities, very small communities -  the government now getting the control in through those charities."

"So what Baroness Pitkeathley is expressing here echoes what

Priti Patel was talking about last week where they`re going to fund particularly smaller charities; they`re going to give them grants. But in order to achieve that grant funding they have to agree to special training."

"And of course that is control."

"So Mike`s hit that absolutely on the button. So let`s just put a few things together. This itself was reported by Third Sector magazine, very good article. I encourage people to go and have a look at it. And it says that basically charities are going to be encouraged to report to government on how they perform and they`re going to be encouraged as Mike says to do training for the government. So why should we be interested in all this? Well in that article this is one of the organisations mentioned: the New Philanthropy Capital and they say: `We have seen our approach adopted and adapted as far afield as Brazil, Germany, Sweden and Israel."

"So we now get a clue that this is not UK internal policy - there`s something much deeper here - and why would we be interested with New Philanthropy Capital?  Well if we look at who created it, it`s Goldman Sachs the very same bank that`s helping the British army to train at the moment, alongside Barclays."

"Let`s have a look at another aspect of this article because we`ve got Power to Change mentioned... we`ve got a gentleman called Christopher Stephens. He was chairman of the Judicial Appointments Commission. So we`ve got a nice mix here Mike. One minute we`re talking about charities. We then have a look at the interests of the senior people involved and they`re busy appointing judges and at the same time they`re part of the Salaries Review Board for the top Civil Service Commissioners who are going to give them the money through the government in the first place. But there`s no conflict of interest, luckily."

"So what else can we add to this one? Well in the article it also mentions Lloyds Bank Foundation with community businesses to revive local assets, protect services people rely on and address local needs."

"Is that assets in the sense of intelligence gathering?"

"I think that`s exactly what`s going on. They`re trying to get people to believe they`re going to be helping the local children`s football team that needs some help refurbishing their ground but if you have a look at what`s going on here it`s massive data collection." 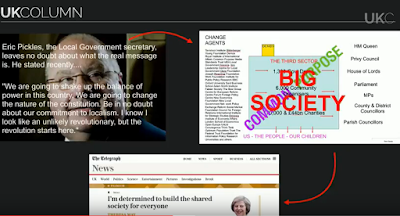 "And we shouldn`t be surprised because of course it was this gentleman Eric Pickles who said: `We are going to shake up the balance of power in this country. We are going to change the nature of the constitution. Now he said that alone; no debate... He said he was going to be a revolutionary -  and the revolution starts here.`"

"So what we are really seeing coming in now is this central core of Big Society. This diagram we did years ago but it showed the change agents driving through the third sector to produce this Common Purpose based Big Society and this is going to be - well you talked about this the other day Mike - well this is Theresa May. She`s calling it the shared society but it`s exactly the same thing just using slightly different language."

"Again this is constitutional change, localism. OK the Localism Bill has gone through and become the Localism Act. That`s quite constrained and limited whereas most of this change seems to be pretty much unlimited and no real debate in parliament about what this change is about or where it`s taking us... "

"And this is because there is effectively no Westminster. We simply have the Cabinet Office with its special advisers driving policy."