Mickey Summers on the campaign trail


Mickey Summers, a child abuse survivor of Nottinghamshire care, looking for justice, who put himself forward as a candidate in Nottingham was not given much of an opportunity to question the electioneering panel, as shown above. Tokenistic support was portrayed by some members of the panel.

It is a pity that Mickey Summers makes child abuse a party political issue. It is not. Child abuse is rampant across all political parties. Having said that, any particular party, or group in power, who turns a `blind eye` to child abuse should be thoroughly vilified. It is vested interests, no matter what those are, which govern corrupt people`s behaviour. .

There was no mention of Melanie Shaw, another child abuse survivor,  who blew the whistle on child abuse in Nottinghamshire  and who is still in a private prison without proper representation or support from her MP, Chris Leslie, seen below with Melanie who  once said he would stand by her. 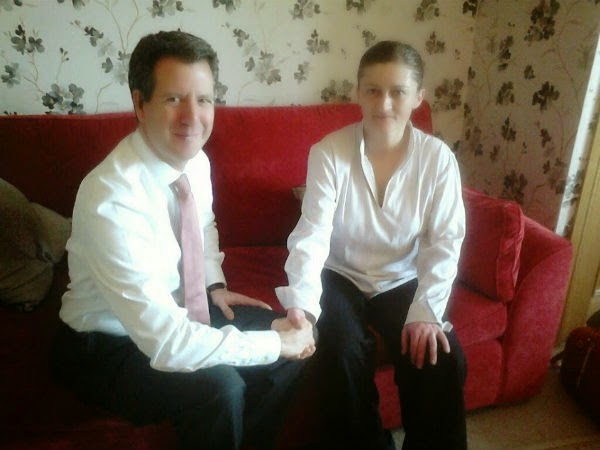 These pre-general election days, when questioned by supporters of Melanie Shaw, Chris Leslie refuses to acknowledge their concerns.
He does not see it as in his interests to do so I would think.
Posted by Alice Moore at 15:49