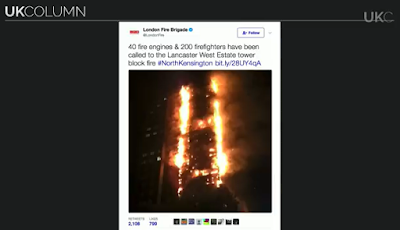 Mike Robinson elaborates: "There were many many warnings that these buildings were hazardous with regard to fire safety... There was a pressure group established to deal with this issue ... but the Kensington and Chelsea Tenant Management organisation [TMO] didn`t seem to take any heed of the warnings. "

"Sadiq Kahn, the Mayor of London, had this to say: `There will be a great many questions over the coming days... I want to reassure Londoners that we will get the answers.` Do you believe him? "

"Not at all," answers Brian Gerrish. "I think as usual there`ll be a big cover-up because, of course, the failure to provide the proper fire detection and suppression equipment is all part of cost cutting and that is what we`ve seen year after year... So everything is based on cutting costs and cutting corners and ultimately as we`re seeing here that puts people`s lives at risk."

Mike Robinson goes on: "So the organisation that manages this building was Kensington and Chelsea TMO..."

And he continues: "I think it was 2011 or so that we did a documentary on this organisation..."

"But one of the points that was made in that documentary was that originally the TMO had been a tenants management organisation - it was a tenants grouping to help manage the properties. But the name was changed once that was privatised to become `Tenant Management Organisation` ... They`re managing the tenants in a particular way. "

Brian Gerrish: "Well, this is all part of the model Mike. We could have a long discussion about this but people are saying from across the country that they`ve been forced out of their council houses in many situations. Of course... the advantage of the council house was once a family had it they had that dwelling for life. They had security of tenure. And then what happened usually with the scam that `We`re going to upgrade your property but if you want the upgrade you`ve got to accept the fact that it will no longer be a council house, it will belong to a housing association."

"Which is a private organisation," interjects Mike Robinson.

"Private? Well, quasi-private, Mike, because usually it`s a private company with input from the local authority. What people discovered was all sorts of rules, regulations. `You can do this. You can`t do that.`  And if you do something that upsets the housing association then they`re issuing warnings, some of them particularly unpleasant ... that you can be thrown out of your accommodation."

"So this is all on the back of austerity. This is all part of the general dismantling of everything to do with what`s good in the public sector, in my opinion."


UK Column takes viewers back several years to the New Deal for Communities Initiative which was a policy of New Labour 1999-2008.

"This is from the final report on the success of the New Deal for Communities. But of course there were lots and lots of problems and many people saying it was a new brutal socio-economic initiative brought in by New Labour and I can say Mike that certainly in the Plymouth South West area the BBC absolutely refused to report all of the dangers: the building, the fraud and corruption, that came in on the back of this programme..."

Viewers are reminded that the programme was designed to achieve six key objectives:


Look at the language... This is a heavily politicised programme. It`s nothing to do with improving people`s lives..." 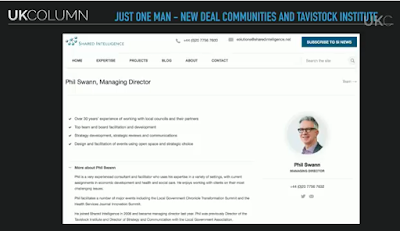 "Now I`ve just picked one man here, I`m not saying this man is at fault. What I`m highlighting is that when you get into the New Deal, what do you find? You find universities and this man is of course also involved with the Tavistock Institute. So we`re into deep applied psychology and social engineering. Let`s see how this thing works. So bring in the New Deal programme, all about regenerating 39 partnerships and 6,900 projects. They`re supposedly looking at crime, community housing and the physical environment, education, health and worklessness - very interesting word - because that was the first time I ever saw that rather strange word and that was in documentation appearing here in Plymouth."

Mike Robinson: "And how`s that different from unemployment?"

"Well this is newspeak. This is transformational newspeak. So the key bit is it all works in partnerships and what this does is to break down separation of powers, responsibility and accountability. And this is the very meat that we`re seeing in this terrible fire accident, that we`ve got the local authority linked into a private company which has taken over that association. This is a deliberate mess where all of these organisations will work to cover each other`s backs because they`re all culpable within the partnership." 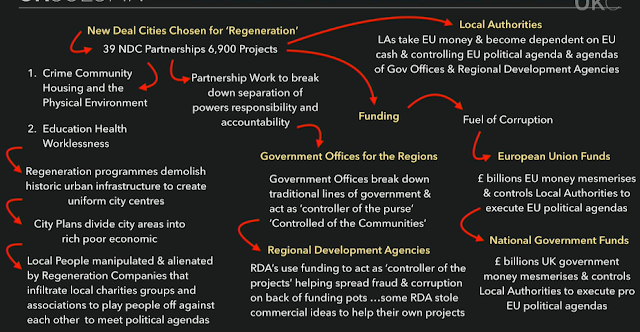 "So everything is there on that diagram for you. We had enormous experience of this in Plymouth including the fraud and corruption and the missing money..."

But the other thing that came in with it was Common Purpose... 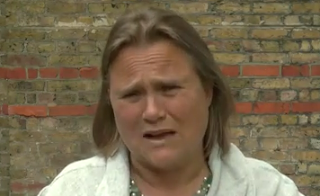 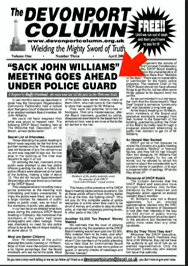 "And this is just amazing," says Brian Gerrish. "This is Devonport Column, the start of UK Column ... and what we were warning about was a very brutal agenda in Devonport in Plymouth where local people that had worked in their community for a long time were bulldozed out of the way by these regeneration organisations. And when people complained the police were brought in to guard meetings. [2006]

"... We got every part of this jigsaw because Plymouth City Council was short of money and had spent £100,000 on Common Purpose training. It`s all here."

In order to understand where the likes of gentrification and common purpose comes from  Gerrish advises people to look at the work of Peter Drucker.  Communitarians, like Peter Drucker, believe that "attaining a healthy society involves the successful merger of the three sectors of society - government, private and social sectors (including the churches). This merger is known also as `Drucker`s `3-legged stool` named after its main proponent, Peter Drucker, who is considered to be the father of modern management. Drucker believed that the only way to persuade the world to accept change is to engage all three sectors of society, working together to effect change`. In Drucker`s model the church becomes interconnected with the state and corporate interests - in reality becoming subservient to these interests."

"In the United States one of the main organisations manipulating the Churches into this Communitarian partnership is the Leadership Network. Where does that take us? You`ve been talking about that for weeks Mike. This is the rise of the so-called City States. And they are going to be the new environment that we live in."

Brian Gerrish: "Patrick I`ll just interject there if I may and say my prediction today is: `that will be an absolute cover-up` because if you look at the way this new city structure works - because these people are all working in partnership - they are all going to defend each other. If any one of them goes down from the local authority or the housing association, any one of them goes down, they`re going to take the rest of them down with them. So you will see very clever calculated cover-ups to produce a report that will say `Well we did make some mistakes. We`ll do better in the future. A few people died but let`s move on.` I guarantee that`s how they will try and drive it."

"Of course. And yet that socio and economic political agenda is the agenda that has actually driven this state of affairs."

"And I`m going to stress that when you ... bring in Common Purpose this is ... where local authorities treat local people as if they are dirt. And clearly in this case ordinary people from that tower block warning and warning and warning that something was wrong. What happens? Not only are they dismissed but the local council spends taxpayers` money on legal teams to try and shut them up. The same thing happened in Plymouth. And I can say that the same ruthless agenda was unleashed in all the cities that undertook the new deal for the community agenda, whether it was up in Glasgow or it was Liverpool, Sheffield - wherever that agenda came in - with it came a very very aggressive change in the way that local authorities and people in the public sector treated the ordinary man and woman in the street..."

Mike Robinson: "Yes, because the term that`s quite often used for this process is gentrification which sounds soft and cuddly but it`s nothing of the kind."

Brian Gerrish: "Nothing of the kind. And of course one of the things that has happened on the back of the regeneration is the private companies have made millions because as ordinary people have been displaced from their homes - they might have been slightly run down homes - but the local councils have displaced local people, brought in the gentrification but that has also allowed housing and regeneration companies to make millions on the back of suffering of ordinary people. This is a very dangerous, serious agenda and the thing to remember is this is not only from Labour, it has been continued via the Conservatives and the LibDem alliance. So this is a cross party agenda. It needs to be stopped."

Also brought out by UK Column was that problems with cladding have been known about for years.