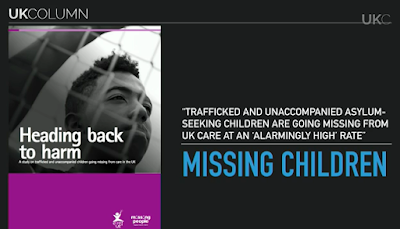 Mike Robinson from UK Column News stated that: "This is a new report that`s come out today. Now it`s discussing child trafficking victims and it`s also discussing unaccompanied children. So what they`re saying is that in one year thirty percent of all UK child trafficking victims in the care system and 13 percent of unaccompanied children in the care system disappeared."

"Now this is the report: Heading back to harm. They`re basically saying that trafficked and unaccompanied asylum-seeing children are going missing from UK care at an alarmingly high rate. This is how they`re describing it. This is from an NGO called ECPAT UK  in collaboration with a charity called Missing People..."

"Through this year-long study, ECPAT UK and Missing People have discovered that an alarmingly high number of both unaccompanied asylum seeking children and children who may have been trafficked go missing from care. Many have not been found. Local authorities with responsibility for the care of these children are frequently not able to report how many unaccompanied and trafficked children are in their care, and many failed to identify any child trafficking victims..."

Brian Gerrish explained that this tied in with what the Metropolitan police whistleblower said. "Because in his testimony he said that when he investigated children`s homes, he found that in a matter of days a large number of children were going missing. The children`s homes knew it; the local authorities knew it; the child protection teams knew it and the police and the MPs knew it. Instead of investigating he was threatened and warned off and told to keep his mouth shut. So what we`re seeing is the real facts about the numbers of children, thousands of children, tens of thousands of children; over the years hundreds of thousands of children abused in the care system. We don`t have a champion at all. Nobody`s standing up in Westminster."
This is a national scandal that has been going on for decades with British children as well as children now being brought into the country.
Mike Robinson continued: "So let`s just remind ourselves from last month: Amber Rudd, the home secretary, at the time of the closing of the camp in Calais saying: `We have about 100 [unaccompanied children] in train who we hope to bring over in the next few weeks but on top of that I`ve made it clear that we will take children from the Dubs agreement`. Now these new children that are coming in - this report that we`re talking about is covering the period 2014 to 2015 - so in fact if we look at the children they were talking about in that report; they`re saying that child trafficking victims who vanished from care were mainly from countries like Vietnam, Albania and the UK and the unaccompanied children who went missing from care are from places like Afghanistan ... Albania and Vietnam. So we haven`t even got the statistics yet for any Syrian or children related to the Syrian conflict or Libya and this kind of thing."
"If you remember last month Stella Creasy saying: `Bringing here every child who has a legal right to be in the United Kingdom would be a really good result.` Well it doesn`t seem to be a really good result for quite a lot of them. And just remember the original MP who was pushing for this: Tim Farron... And if you remember back in October I highlighted this organisation Help Refugees who were absolutely campaigning for unaccompanied children from Calais to be brought over here. Now I asked them about this issue of children disappearing from care and this is what they had to say:"

"Thank you for your email and for your concern. The Dubs transfers are being carried out by the Home Office, who will be working with the Red Cross to ensure the protection of those children."

"We are currently in talks with Refugee Action. We will be collaborating on ensuring that those children brought to the UK are secure, cared for and that their best interests are observed. We are fully aware of the risks of child trafficking within the UK, however, the risks of trafficking within refugee camps across Europe and the world are exponentially high. Naturally, comparisons are difficult to draw."

"We feel that for those particularly vulnerable children who qualify under the Dubs Amendment and for whom a best interests assessment recommends their transfer to the UK, should be brought into the British care system."

"Well the big lie of course Mike is there is no care system because what we are seeing is wholesale abuse of children within that system. So they`re bringing these children in; they cannot guarantee the safety of children in Britain and Tim Farron was happy to say in an email that yes out of the 300 missing Syrian children... it was inevitable there would have been some trafficked and abused. I understand that today Mr Farron is pushing out emails about flood defences. So he`s not the slightest bit bothered about child abuse. He`s getting a little bit worried because we`re heading for the rain... season."
Returning to the subject of missing children: "So we still have to wait for the statistics about that - if they ever appear." 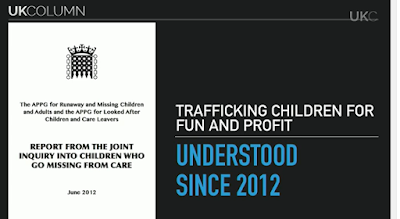 UK Column then commented on the fact that government does not collect the data on what happens to children who go missing from care.
=============
The news ended with a look at media manipulation with particular reference to the BBC Panorama programme Saving Syria`s children.

"On 29 August 2013, as the UK House of Commons vote on possible military intervention in Syria was underway, BBC News at Ten broadcast a report by Ian Pannell and cameraman Darren Conway which claimed that a Syrian fighter jet had dropped an incendiary bomb containing a `napalm-type` substance – possibly thermite – on the playground of an Aleppo school."

The blog examines the evidence and comes to the conclusion that this was a staged event.