A couple`s fight to look after their granddaughter 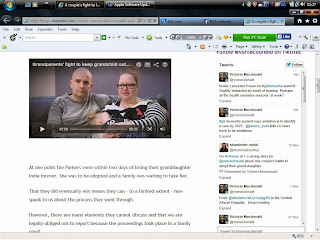 The above article appeared on the Channel 4 website Tuesday 10 December 2013:


Katrina and Lee Parker, two grandparents from Colchester, Essex, discovered that when their daughter was not able to look after their granddaughter there was no automatic right for them to be able to step in and take care of the little girl.
In fact for the Parkers it turned into a year long battle with Social Services who were determined that the little girl should be adopted.

The Parkers believe that the wider public do not understand how the system works against families and although they have been gagged to a great extent from speaking out about their case they feel it is important that people know about how it works against grandparents and in secret.

"There is a lot of misunderstanding in society that grandparents somehow have rights," Katrina Parker said.

They were particularly angry at Social Services who did not inform them that they had obtained a care order or keep them informed about meetings or provide them with information in order for them to be able to put up a fight to have their granddaughter returned to their care. The reporter goes on:


What is disturbing about this case is that the Parkers were initially – and wrongly it turns out – excluded from even applying to the family court to take part in the care proceedings and to prevent the adoption.

They were saved by a judge who gave them the right to appeal. We are not allowed to know why the judge granted that appeal.

One commentator on the article has this to say: