Armed police to be the norm ? 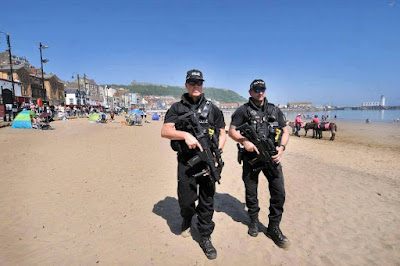 "Scarborough Beach ... the normalising of heavily armed Police who will SHOOT ANYONE ... if the instruction to do so comes through their ear-piece!"

On the Sunday Wire radio show Patrick Henningsen talked with Mike Robinson about the reactions of the state to the Manchester bombing. Campaigning for the upcoming general election was suspended. Following that there was the deployment of armed British troops. It was agreed that that had never happened before on mainland British soil in peace time.

Henningsen remarked on the timing of the terrorist event and reminded listeners of the London underground bombing. Tony Blair was up in Gleneagles in Scotland at the time with George W. Bush for the G8 summit. The timing of the Manchester bombing is highly significant too in relation to global events.

There has been the OECD anti terrorism conference; and the opening of the new NATO headquarters attended by heads of state and government in Brussels; immediately followed by the G7 summit.

In response to the Manchester bombing: "They`ve said they`re deploying armed military personnel, looking after infrastructure projects, nuclear structures, Buckingham palace, and so on. They have denied that the army are on the streets. Look at the original photographs in the media showing parades of military personnel marching along the streets. However the other interesting aspect is that the military personnel will be acting under civilian police control. It is unprecedented."

"A worrying aspect of this," thinks Mike Robinson "is that it all fits with European policy because in November 2015 at the European Defence Agency conference Frederica Mogherini, who is effectively the EU foreign minister, in her keynote speech at the European Defence Agency conference said that first of all Europe needs to develop its own defence capability, its own military capability. But she was also absolutely presenting the idea of merging civilian and military structures. And this seems to be the first indication that Britain is heading down that road."

"And this event in Manchester is the excuse which is driving that and to date I have not heard a single Brexit campaigner or a single UKIP person asking questions about this. Because it is an EU policy and lots of people should be asking questions about why military personnel would be operating under civilian policing command and control."

"There has been a polarisation in public opinion... Some are calling for more of this... from various NGOs and the police themselves."

"Take a selfie with your armed police officer. Get it on to Facebook ... " 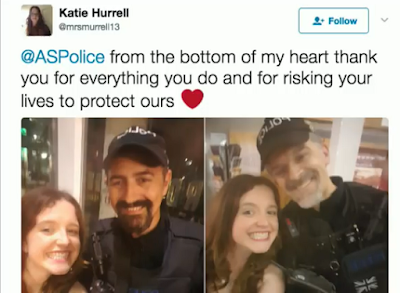 Patrick Henningsen. "So the police are actively soliciting the people to tag their friends in the photos with armed police ... Clearly this is the police doing an active public relations campaign to try to get the youth clamouring, I guess, for more armed police." 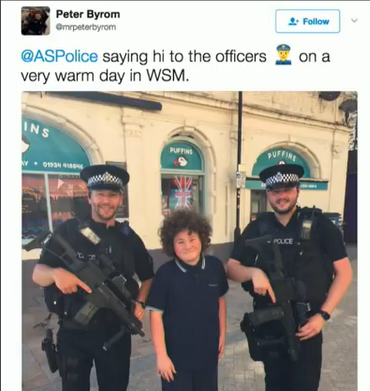