"Treloar was at the cutting edge of care for children with haemophilia. A unique National Health Service centre was opened on the campus, ensuring that pupils received the latest medical treatments, while their studies continued with minimal disruption."

"But now it has emerged that of the 89 boys with haemophilia who attended this pioneering school in the decade after 1975, only 17 are still alive."

"The other 72 have died, many of them barely reaching adulthood – victims of one of the most devastating episodes in NHS history."

"This astonishing revelation provoked new calls ... for an official inquiry into a scandal that shames Britain’s medical and political establishment: the deaths of more than 2,000 haemophiliacs from tainted blood products designed to improve their lives."

"‘The number of deaths at this one school alone should have warranted a public inquiry, let alone the thousands of others who have died,’ says Joseph Peaty, a former pupil at Treloar and a leading member of the Tainted Blood campaign." 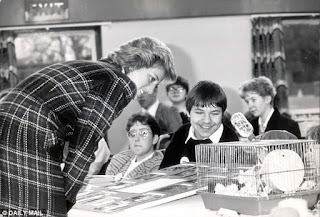 Princess Diana at the school 1989
Read more: http://www.dailymail.co.uk/news/article-4480992/Scandal-Treloar-College-s-tainted-blood.html#ixzz4gcRIwD1E
Posted by Alice Moore at 14:35