"One of the things that is being picked up on is, of course, the Trans Agenda," says Brian Gerrish.  "And I`ll just bring in this Express headline which is pretty powerful. `Labour MP stuns Piers Morgan with `insane` comment babies are born `without sex`. `Labour MP Dawn Butler received a furious backlash on Twitter after she claimed ` a child is born without sex` during a heated exchange with Richard Madeley on Good Morning Britain`. - That`s the ITV programme." 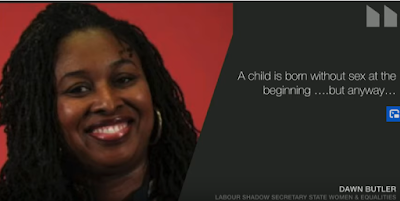 "Now notice the backlash occurred on Twitter because that`s obviously where the debate was being carried out. It certainly wasn`t being carried out across the BBC or any of the other mainstream circuits. So we`ve got a good indication here as to why social media is so important and so worriesome to the establishment."

"Let`s have a look at how this pans out.  This is the line that this lady came out with. `A child is born without sex at the beginning... but anyway` ... and then she carries on."

"Now the lady in question is shadow Secretary of State for Women and Equalities. So this is not just some idle person: this is the person with actual power within the labour party; so anybody in the labour movement is going to come under her influence on this subject and, of course, she has the ability to use the labour platform to push this out into the wider public environment."

"So this was the dialogue that took place with Richard Madeley."

"`Do you think somebody that embraces transgender but nevertheless decides that there is a biological difference based on chromosomes, based on a penis that may not have been removed after surgery, are you saying that person is transphobic? So if you look at the genitalia of an individual and you comment on the person on the basis of that genitalia does that make you transphobic?` Well this is how it went."

"She said: `If you`re saying that a trans woman isn`t a woman then there are issues around that. Talking about penises and vaginas doesn`t help the conversation because what you`re saying then is a trans woman isn`t a woman by your own definition.` Madeley responds: `You`re confusing the question with an opinion. I don`t hold that opinion at all.` She says: `Explain the penis reference that you just referred to`. Madeley says: `Look when a child is born they`re identified and observed in a particular way,` and she then comes out with this classic line `A child is born without sex at the beginning... but anyway.` So really phenomenal stuff."

"She`s got this immense power to put the idea across but we`ve got to ask the question: where does this policy agenda come from?
This is the key issue: politicians spouting words clearly they havevn`t sat down with a colleague and a cup of tea to think about these issues and come up with their own basic policy drivers. They are regurgitating information that`s come [to] them, So where do we go to find out where the policy is coming from?"

"Well of course we`re not going to be able to go to the BBC. We`re not probably going to be able to get it at the mainstream media. Let`s go back to social media and look at some very serious analysis here by former Daily Telegraph foreign correspondent Francis Harris as he starts to track down the Trans Agenda. We`re really going to encourage people to go to his Twitter page which is at F Harris 2011 and if you search down to the 16th February you can find what I`m about to show you; but, basically, he puts up a very detailed and well researched thread pointing out that the lobbying group Stonewall was once a champion of the gay and bisexual community, but not anymore. It`s now pursuing an extreme and unpopular Trans Agenda. So who`s funding this unrepresentative group and how does its influence spread?"

"And he follows through. As I say this is a whole series of tweets which you really need to see yourself and to read through it in a sequence. He says: `Here`s a link to the most recent Stonewall accounts. This reveals that Stonewall relies on taxpayers for much of its income and that`s not all`." 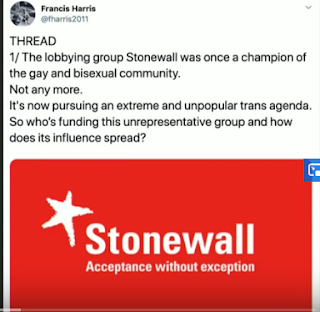 "So not only does Stonewall take our money to campaign for extreme changes in the law which most women oppose, it encourages the `Diversity Champions` to accept its extreme manifesto. And I was vey pleased here, Mike, to see that this man [was] really very quickly on the trail of change agents - because this is what these divesity champions are. These are people helping to drive change and an agenda and, of course, with sufficient funding and power behind them they become very dangerous individuals."

"So what isn`t really being talked about with Stonewall, well, first thing is who are the people who comprise Stonewall? None of them were elected... the people have chosen themselves and clearly we can assume that they`re going to have similar likes and dislikes but we`re about to show that once they`ve elected themselves to their own organisation - which I`m sure will describe itself, Mike, as `independent` - we can get a feel for who we`re dealing with."

"Now Stonewall`s site, to its credit, does put up pictures of individuals and short CVs but really all that does is start to raise the question - because you`ve got lawyers; you`ve got very poweful marketing and brand managers which would be key if you wanted to change people`s minds on a particular subject; you`ve got everything from somebody in Amnesty International, somebody with the financial conduct authority and more; but we don`t really know who these people are and you have to search elsewhere really to start to get some idea of what you`re dealing with." 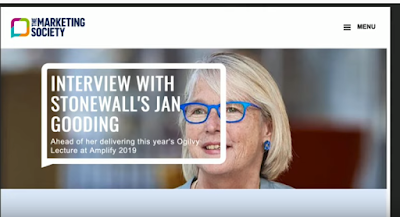 "So this is the Marketing Society who`ve done an interview with Chairlady Jan Gooding. Well, I say lady, I`m not sure [if] that`s how she`d identify at the moment. And it`s a very good interview. but this is very interesting. 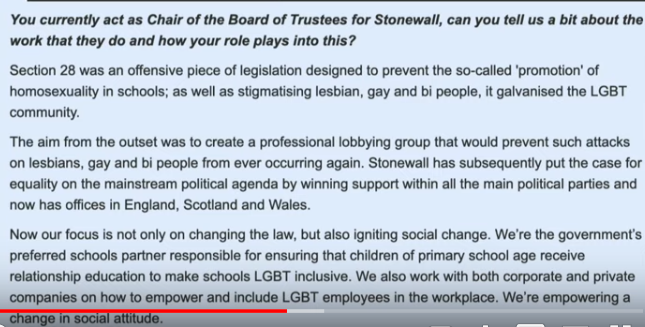 "Now pehaps the key bit is to say have a look at the bottom here:
`Now our focus is not only on changing the law, but also igniting social change. We`re the government`s preferred schools partner responsible for ensuring that children of primay school age receive relationship education to make schools LGBT inclusive. We also work with both corporate and private companies on how to empower and include LGBT employees. We`re empowering a change in social attitude`."

"So, Mike, we`ve got a group of people who have created their own organisation; they`ve set their own agenda; but these are the people used by the Department for Education to get into schools, including primary schools, to set that agenda. Has the average parent been told that this is how the system works?"

"So the important thing then is to have a look at their funding and I`ve done this in a little bit more detail than Mr Harris did on his Twitter page although he did direct people to the accounts. So this is from the charities` accounts, accounts that Stonewall had to submit." 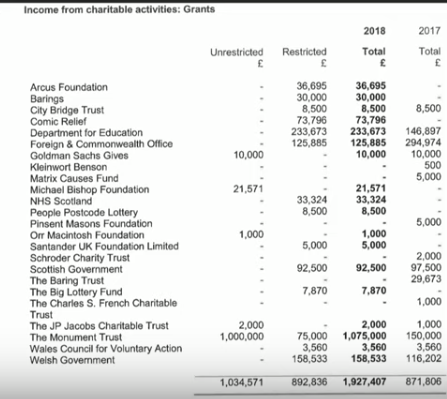 "So if we just follow it round: public money, our money, given to Stonewall to create their agenda using the diversity champions and global diversity champions. They also pick another group of change agents because here they are with their trans allies - now these are the non trans people that they`ve recruited, supported, funded, to act as change agents to help drive the trans agenda; and, as Mr Harris pointed out, it`s phenomenal the breadth, the penetration these people have got into a number of organisations. I`ve  added the military in there. The rest of them were listed on the... social media site... etc." 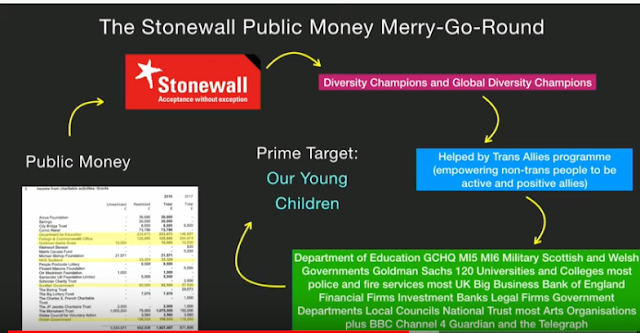 "Of course the target is our young children. But we`re going to ask the question: when did the wider public agree to any of this?

https://www.youtube.com/watch?v=mBRsuABDJss
Posted by Alice Moore at 12:10