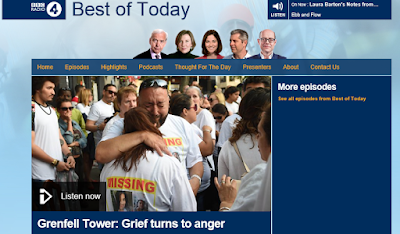 John Humphrys interviewed Conservative MP Sadiq Javid on BBC radio 4. He has served as Secretary of State for Communities and Local Government since July 2016.

"If it was true of course it is... but we have to go by the evidence. We have to know what`s caused this. It could be, for example, there are some reports that say it could be how the cladding is fitted. It could be maybe the regulations weren`t met. ... We don`t know and I don`t want to speculate ... It`s not my job to speculate. I`m not a fire expert. You`re not a fire expert..."

"We have to be led by the experts on this. Whatever they tell us is the cause, it`s what we need to act on."

John Humphrys: "My point is that the experts have spoken and they have been speaking for the last 17 or 18 years about this particular form of cladding, and various other aspects of it like the sprinkler system and one architect... and this is not speculation - these are the experts responsible for several re-cladding projects - said that the tower`s cladding was designed to include fire breaks at every floor and around every window and if they had been installed correctly then the flames couldn`t have swept through it the way they did. Now there are some things that we don`t have to wait to find out because it`s already there. It`s already on the records. We know that the Select Committee of the House of Commons produced a report a few years ago detailing all of these potential crises. No action was taken whatsoever. It isn`t just your last government it was governments before that as well, going back to 2000. Nothing was done, even though the dangers were known. That`s the point."

From the Grenfell Action Group:

"Even the dogs in the street know that the flammable cladding encasing the exterior of Grenfell Tower played a major part in spreading and accelerating what began as a single dwelling fire with such rapidity that the entire interior of the 24 storey building became a raging inferno in less than an hour. It is incumbent on us also to state our firmly held belief that the cladding in question was not introduced for the benefit of the residents of Grenfell Tower but because Kensington and Chelsea Council had redeveloped the surrounding area, building another of their flagship academy schools right next to Grenfell Tower, and a new sports and leisure centre next to that. The cladding on Grenfell Tower was intended to pimp it up so that it wouldn’t spoil the image of creeping gentrification that the Council are intent on creating, here and throughout the rest of North Kensington.


"Regeneration is just a euphemism for gentrification"