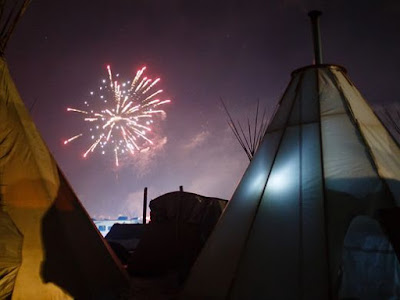 "A day that began with prayers ended with victory dances Sunday as Native Americans and environmentalists here celebrated the news that President Obama's administration would halt construction of the Dakota Access pipeline."

"In the most substantial blow yet to the much-contested pipeline, the U.S. Army Corps of Engineers denied an easement for the pipeline to cross Lake Oahe, a Corps reservoir on the Missouri River in North Dakota. That remained the only contested portion of the 1,172-mile pipeline, which is nearly completed."

"In a statement late Sunday, pipeline builder Energy Transfer Partners said it remained committed to completing the project without a reroute."

"The White House’s directive today to the Corps for further delay is just the latest in a series of overt and transparent political actions, the statement read, `by an administration which has abandoned the rule of law in favour of currying favour with a narrow and extreme political constituency`."

"The pipeline was set to cross the river a half-mile from the Standing Rock Sioux reservation border. Tribal members have for months protested the project, worried that a pipeline breach could threaten their drinking water supplies..."

Email ThisBlogThis!Share to TwitterShare to FacebookShare to Pinterest
Labels: miscellaneous