Will GIRFEC make everything right for children in Dumfries and Galloway? 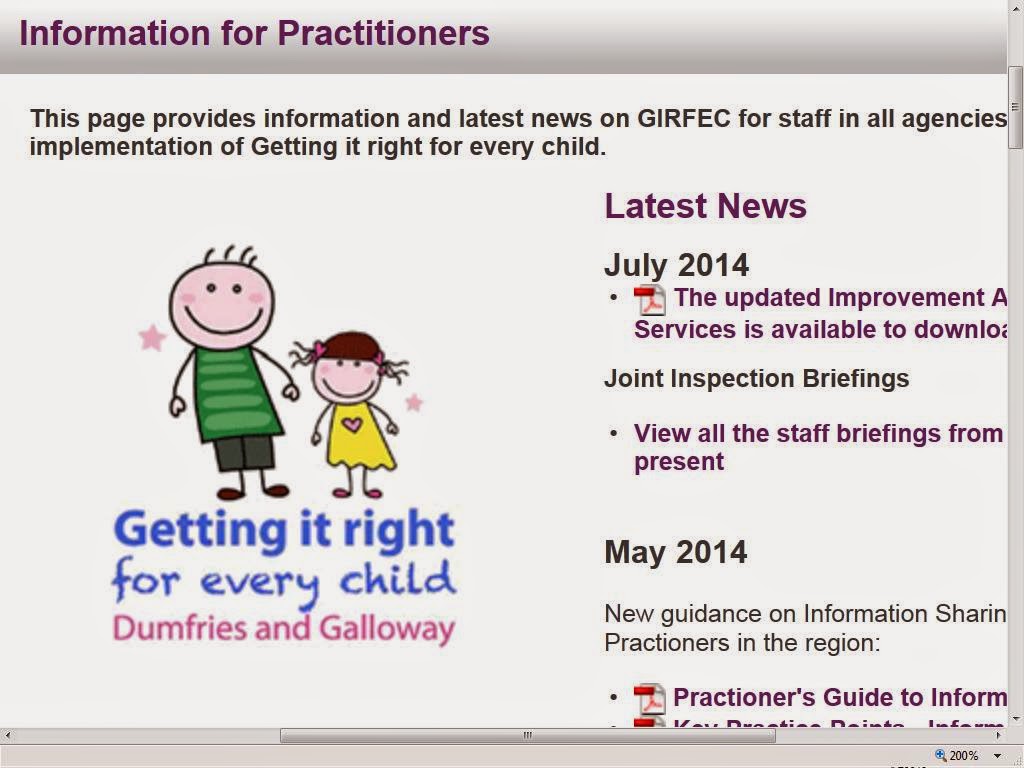 For anyone who wants to know what the corporate parents in Dumfries and Galloway have in mind for every child in the area,  The updated Improvement Action Plan for Children's Services is available to download [149kb] [accessed 21 July 2014]. The little smiley cartoon characters on the website tell us that the corporate parents are Getting it Right for Every Child when really there is much cause for concern. There have been two serious case reviews in Dumfries and Galloway in recent times.

Social services have admitted to failings in their care of a baby who was killed by his father in south west Scotland. Dumfries and Galloway Council said a mistake was made in not placing Dylan Lockerbie on the child protection register.

Ian Metcalfe was found guilty on Tuesday of the culpable homicide of Dylan, who died when he was five months old in March 1996.

Metcalfe, 34, was also convicted of assaulting and killing another son, Kyle, aged 10 weeks, in 1988.

Kennedy McFarlane died on 17 May last year after a blow from her mother's boyfriend sent her crashing into the leg of a bed. Thomas Duncan, 33, was sentenced to life for the child's murder at the High Court in Edinburgh in November.

The independent inquiry, which was carried out by consultant paediatrician Dr Helen Hammond, said the child's life could have been saved if Dumfries and Galloway Council implemented its full child protection procedures.

If ever there was a case to be made that agencies need to pay attention to child protection procedures, above all else, these tragedies point to that as a priority. The Council was held responsible for failing to take protective action that resulted in the deaths of both Dylan Lockerbie and Kennedy McFarlane.

Unfortunately, the inspection teams who submitted their report earlier this year and to which the Council responded have more to say about GIRFEC than child protection. According to GIRFEC, children are to be kept safe, healthy, achieving, nurtured, active, respected, responsible and included. In other words staff are to be left unclear about what is expected with regard to child protection because GIRFEC gives them little focus.

In particular the report noted that staff were not always confident about sharing information or reaching a shared understanding of the significance of information when there were lower level concerns about children and young people.

Exactly.  That is what campaigners against GIRFEC have been saying all along. `When you`re looking for a needle, don`t make the haystack bigger.`