David Scott reported on the recent account in the Sun concerning MSP David Mackay and his persistent text messages to a teenage boy. [about 22 mins into the programme]

There were over 200 texts sent to the boy, Scott pointed out, and among them Mackay offered to take the boy to a rugby game even though Mackay himself had no interest in rugby, but the boy was interested. He also offered to take him canvassing and dinner afterwards amongst other things. Scott emphasised that this went on and on and on, despite the fact that Mackay knew the boy was only sixteen because he had asked him directly.

"Now the Scottish conservatives in parliament," according to  David Scott, "Actually called this very accurately, and somewhat unusually...They quoted the NSPCC guidelines to what is grooming."

"And NSPCC goes on to explain how this happens and it talks about authority figures being involved, social media and networks of text messages being a medium of information being passed around. And it talks about the groomer giving advice, showing understanding, giving attention, taking the young person on trips, outings, holidays, this sort of thing. So all of this, it seems to be a classic case of child grooming."

"Now the mother found out about this last week and I would have to say played it exactly right. She didn`t go just to Police Scotland; she didn`t go to the politicians; she went to the press... They put her on the front page and Mackay had to go..."

"Of course there are other stories coming out.  Here`s one reported in the Daily Record." 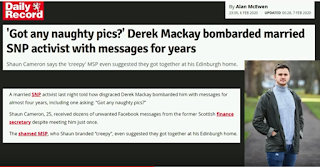 "A married SNP activist last night told how disgraced Derek Mackay bombarded him with messages for almost four years, including one asking: `Got any naughty pics?"

"Of Course, Nicola Sturgeon claimed she knew none of this; it was a shock to her; she never saw any of this coming, despite having actually banned him from drinking at a party conference because of his behaviour some years ago. I`m not quite sure what the behaviour was. Maybe we`ll find out."

"So the Scottish government said:

"`Given you yourself state that there is nothing illegal or unlawful in the messages, can you advise on your justification for publication, given the intrusion into private and family life, and correspondence, including digital communication.`"

David Scott: "Do you see the implied threat of law breaking? `Oh you`re accessing digital communications; you could be breaking the law. Do you see where they`re pushing? It`s private life. So grooming a sixteen year-old boy is private family life..! "

"They were asked did they obtain this information by legitimate means. They were asked for the name of the boy but the Sun did not give in to any of this pressure and published anyway."

"The reaction was quite stunning in Scotland. The degree to which people quickly realised that this was part of a bigger malaise in the SNP was very striking.  But also, the reactions of the true believers within the SNP to defend the utterly indefensible was equally striking. The most egregious example is on the next slide where an SNP councillor - so this is someone with some responsibility, to some extent, in child protection issues - heard about this and her view was: `It`s all a nasty British establishment unionist plot.` She said: `Stupid man, probably a honey trap set up by the British establishment and he`s walked right into it.`" 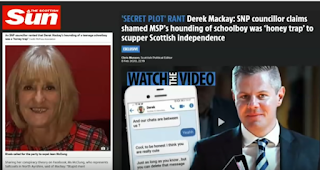 There were others who considered that the mother and boy did not even exist, to which David Scott commented: "No, I`m sorry, this is a predatory homosexual going after a young sixteen year-old boy. That`s what it is. We have to face reality here."

"Now of the various people who looked at the wider implications, one of the best, yet again, was the Wee Flea. This is a blog by a minister of the Free Church of Scotland, formerly in Dundee and he`s looking at it as if it`s the end of the Scottish government and I don`t think this is hyperbole. This is absolutely existential because this gets to the heart of everything the Scottish government is doing. The concentration on children, the concentration on very often 16 year-old children, the whole woke pro-gay agenda, all of this starts to play into this particular little drama."

"Now this also plays into the pushing of both the queer agenda and queer theory in schools and also some very troubling developments where the Scottish government is pushing sexual education of a most alarming nature into schools."

"And so the next video we`ll just play in the background. This is from a Dundee school which is one where the Wee Flea blogger had direct involvement... "

Quoting from the Wee Flea blog:


"This video suggests that it is the children themselves who are leading this sexual revolution which is as nonsensical as saying that Mao`s little Red Brigades were spontaneous uprisings in favour of the great leader and had nothing to do with him or the communist party. The children on these videos are being indoctrinated... they have a shallow and cheap view of love... and they even have their own `pupil led` committee to ensure that everyone else is on song."

"The deputy head teacher, an LGBT activist, is responsible for this - along with my old sparring partner Gregor Murray, the former head of Dundee Education - who was fired because of his abusive tweets against feminists. Gregor is a radical exponent of queer theory. This leads to confused children and is in my opinion a form of child abuse and it is a kind of grooming - preparing children for sexual activity in [not too] later life. The trouble is, as parents told me, if they raise concerns about this, they are frightened of being labelled homophobic or transphobic."

"Now this ties in with the experience recently in Birmingham where Christian, Muslim and Jewish parents stood up against the education being forced on the children and they were labelled homophobic and transphobic... So some of the comments on Twitter  have been truly excellent on this. I mean some of the analysis that has actually been delivered on Twitter has been far in excess of anything coming out of the mainstream press." 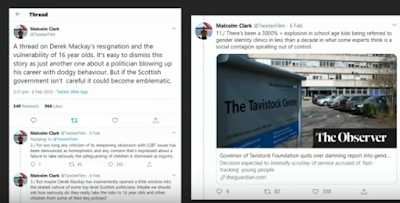 "It`s easy to dismiss this story as just another one about a politician blowing up his career with dodgy behaviour. But if the Scottish government isn`t careful it could become emblematic."

"For too long any criticism of its deepening obsession with LGBT issues has been denounced as homophobic and any concern that`s expressed about a failure to take seriously the safeguarding of children is dismissed as bigotry."

"But maybe Derek Mackay has inadvertently opened a little window into the shared culture of some top level Scottish politicians. Maybe we should ask how seriously they really take the risks to 16 year-olds and other children from some of their key policies."

"And he then talks about: `There`s been a 3,000% explosion in school age kids being referred to gender identity clinics in less than a decade, in what some experts think is a social contagion spiralling out of control`. [A similar organisation in Glasgow has seen an 80% increase.]

"When critics warn Scottish ministers all this is a child safeguarding nightmare they roll their collective eyes. They`ve taken advice they say. But who are their experts? The government has taken advice almost exclusively from a tiny clique of LGBTQ lobby organisations."

"Stonewall Equality Network LGBT Youth & Scottish Trans Alliance form a magic circle of influence. Personnel are best buddies with leading politicians and by an amazing coincidence these organisations then obtain huge funding from the same administration their mates run."

He then lists some of this funding...

"It totals something like two million over three years. So the government pay the lobbyists to lobby the government to make the change. That`s how it works, and the change is rapid. Parents are not being asked. And this brings us to an excellent article by Bruce Scott in the Scottish Review. He`s talking about the crisis of consent in Scottish schools."

"Exposing children or adults to a spurious ideology based on dubious scientific methods is a form of abuse or adversity if consent is not obtained. The ACE* `movement`s` cry for ACE aware schools for example, is effectively a psycho-educational treatment based on theoretical facets of cognitive behavioural therapy (CBT); i.e. resilience indoctrination in schools under RSHE (relationships, sex, health education). This programme is nothing more than inappropriate focussing of a child`s mind on their own mind, creating issues where none are, creating distress in children who do not have the maturity to introspect to such a degree, and manufacturing `mental health` difficulties due to iatrogenic effects of the `treatment`."


*ACE (Adverse Childhood Experiences) which are meant to dominate the rest of [a child`s] life.

"This brings me to another area where consent and/or consultation with parents are being disregarded even further with plans to roll out LGBT inclusive education in Scottish schools. Supposedly the driving force behind this policy drive in Scotland (supposedly, as it is argued that it is in fact a United Nations driven agenda) is the TIE Campaign (Time for Inclusive Education) in Scotland. TIE, along with the Scottish government and their LGBT Inclusive Education policy working group are proposing that every aspect of the school curriculum, from nursery/primary one upwards, is to include LGBT focussed materials. What is the drive behind this?"


"So he finishes off by saying:"

"Children are precious and vulnerable. We must get this right now, rather than realising in 10 or 20 years from now that we have harmed children. No doubt due to reports in the media of psychologists resigning from the Tavistock Gender Clinic in London over worries of pressuring children into gender transition, and the skyrocketing of referrals of 4-10 year-olds to gender identity clinics, it may be that the tide is turning, and people are waking up."


"More people need to wake up, especially parents. If parents do not fight for their children, who will? Chief Mammy and the Scottish Government? I don`t think so."

"So he`s seeing this as a rising tide of state sponsored abuse and I think he`s absolutely correct."

"The Highland Times here looked at the sort of sex education materials that are being introduced by the Scottish government into Scottish schools." 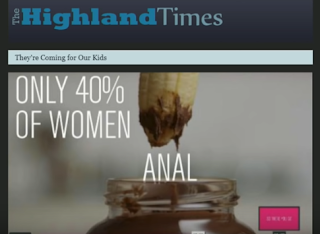 "If you`re a parent, and already alarmed, I warn you to prepare to be enraged. Schools are currently rolling out a radical new SNP Scottish Government sex education policy."

"I use the term radical because it is nothing like the sex education anyone reading this article will have undergone."

"When I was at school, in second-year science class (I was 12 or 13 then) I was first introduced to our `bits`. My class had to wait a whole year to find out what those `bits` were used for and it was still taught in a science lab."

"So that is what is being introduced into schools. We don`t see grooming simply by one member of the Scottish government; we see grooming of children by the entire state, the SNP, by Scottish government and my concern is that this will be the next Rotherham; this will be the next wave of child abuse and we`ll be talking about how did we not see it happen, ten or twenty years from now when in fact this time more obviously than ever before it is in fact the state that is pushing it."

"So the squashing of the Named Person scheme, [was] a very important step forward."

From the Scottish Family Party which David Scott gives credit to: